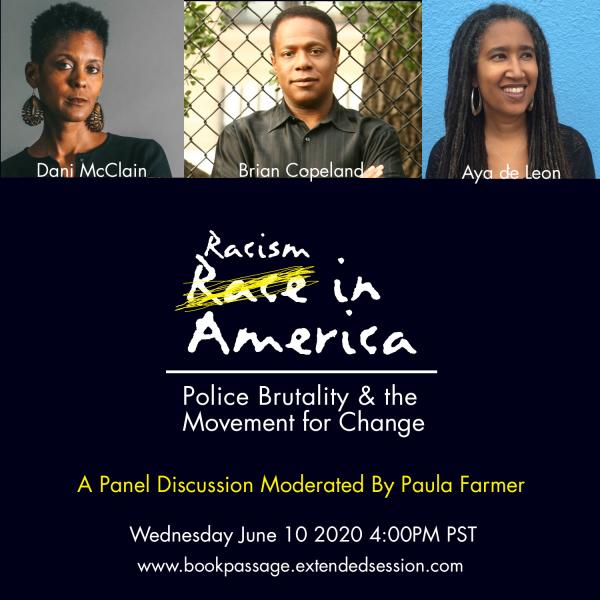 Racism in America: Police Brutality & the Movement for Change

Requires free registration to attend. Held in support of National Bail Out, a Black-led and Black-centered organization that works to end the horrific policy of pretrial detention and cash bail that keeps so many people of color in jails and prisons without a conviction, solely for their inability to pay.

Brian Copeland is an award-winning actor, comedian, author, playwright, television and radio talk show host based in the San Francisco Bay Area. In 2004, he debuted his first one-man play, Not a Genuine Black Man at the Marsh in San Francisco. Copeland published a best-selling book based on Genuine that is now required reading in several high schools and colleges across the country.

Aya de Leon is an author and activist based in Berkeley. She directs the Poetry for the People program, teaching creative writing at UC Berkeley. In addition to being the author of an award-winning feminist heist/romance book series, her writings have appeared in Ebony, Essence, Writers Digest, Huffington Post, and The Root, to name a few. Since 2013, she has been blogging on race, class, gender, culture, and social justice politics.

Dani McClain reports on race and reproductive health. She is a contributing writer at The Nation and a fellow with Type Media Center. McClain's writing has appeared in outlets including The New York Times, TIME, The Atlantic, Slate, Colorlines, and The Rumpus. In 2018, she received a James Aronson Award for Social Justice Journalism. McClain has worked as a strategist with organizations including Color of Change and Drug Policy Alliance. McClain’s book, We Live for the We: The Political Power of Black Motherhood, was published April 2019 by Bold Type Books.

Moderated by Paula Farmer - In addition to being an event host/Moderator for Book Passage, she also curates special panel events focusing on discussions about topical social issues, like “Race in America” and “Immigration in America.” She is Chairwoman of the Diversity & Inclusion Committee for California Independent Booksellers Association (CALIBA). Her background is in journalism.

Below, please find links to purchase a selection of books by the panelists. A list of books that they recommend will be available here after the panel on Wednesday.

Not A Genuine Black Man (Paperback)

A Spy in the Struggle: A Riveting Must-Read Novel of Suspense (Paperback)

We Live for the We: The Political Power of Black Motherhood (Hardcover)