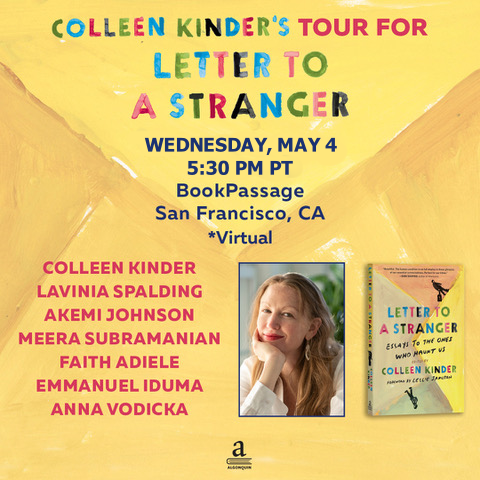 Letter to a Stranger
edited by Colleen Kinder

Sixty-five extraordinary writers grapple with this mystery: How can an ephemeral encounter with a stranger leave such an eternal mark?

When Colleen Kinder put out a call for authors to write a letter to a stranger about an unforgettable encounter, she opened  the floodgates. The responses—intimate and addictive, all written in the second person—began pouring in. These short, insightful essays by a  remarkable cast of writers, including Elizabeth Kolbert, Pico Iyer, Lauren Groff, Gregory Pardlo, Faith Adiele, Maggie Shipstead, Lia Purpura, Kiki Petrosino, and Jamil Jan Kochai, are organized around such themes as Gratitude, Wonder, and Farewell and guide us both across the globe and through the mysteries of human connection. Addressed to a first responder after a storm, a gambler encountered on jury duty, a waiter in  Istanbul, a taxi driver in Paris, a roomful of travelers watching reality TV in La Paz, and dozens of others, the pieces are replete with observations about how to live and what we seek, and how a stranger’s loaded glance, shared smile, or question posed can alter the course of our lives.

Moving and unforgettable, Letter to a Stranger is an irresistible read for the literary traveler and the perfect gift for anyone who is haunted by a person they met once and will remember forever.

Colleen Kinder is an essayist and editor whose work has appeared in The New York Times Magazine, The New Republic, National Geographic Traveler, Salon.com, and The Best American Travel Writing. She has taught writing at Yale University, the Chautauqua Institution, and Semester at Sea. A Fulbright Scholar, Kinder received her MFA at the University of Iowa and is the author of Delaying the Real World and the cofounder of the online magazine Off Assignment (OffAssignment.com), where some of the pieces in this anthology originated. Her website is colleenkinder.com.

Lavinia Spalding has edited five previous volumes of The Best Women's Travel Writing. She is also the author of Writing Away: A Creative Guide to Awakening the Journal-Writing Traveler and With a Measure of Grace, the Story and Recipes of a Small Town Restaurant, and she introduced the reissued e-book edition of Edith Wharton's classic travelogue, A Motor-Flight Through France. Her writing appears in numerous print and online publications, including Sunset, Yoga Journal, San Francisco magazine, The San Francisco Chronicle, Tin House, and The Best Travel Writing. She lives in New Orleans.

Akemi Johnson is a former Fulbright scholar in Okinawa and has written about the island for The Nation, Travel + Leisure, Explore Parts Unknown, and other publications. She has also contributed to NPR's All Things Considered and Code Switch.

Meera Subramanian is an award-winning journalist whose work has been published in New York Times, Nature, Virginia Quarterly Review, Orion, and elsewhere. She is an editor for Killing the Buddha and earned her graduate degree in journalism from New York University. Subramanian received a Fulbright-Nehru Senior Research Fellowship for her work on A River Runs Again. She lives on Cape Cod in Massachusetts and can be found at meerasub.org and @meeratweets.

Faith Adiele, a graduate of Harvard College and the Iowa Writers' Workshop, is assistant professor of English at the University of Pittsburgh. She lives in Pittsburgh, Pennsylvania.

Banner photo courtesy of the publisher

Letter to a Stranger: Essays to the Ones Who Haunt Us (Paperback)