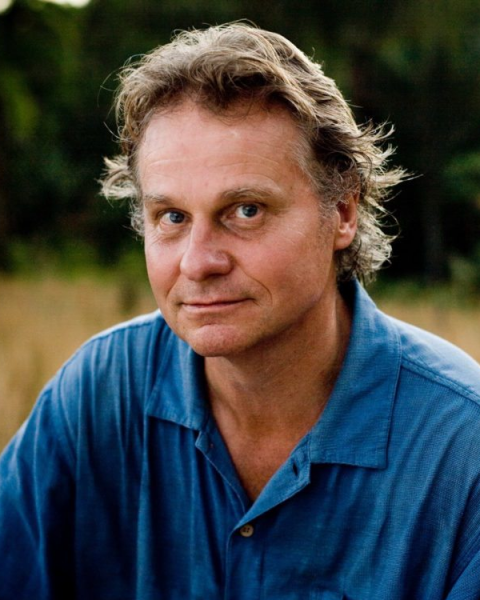 BUY BOOK  CLICK HERE ON EVENT DAY
SUBSCRIBE TO OUR E-NEWSLETTER
This event will be broadcast live and does not require registration to attend. To view, please click the "Watch Here" button at the time of the event, or subscribe to our e-newsletter to receive a ten-minute reminder.

A captivating new book from Wade Davis — award-winning, best-selling author and National Geographic Explorer-in-Residence for more than a decade — that brings vividly to life the story of the great Magdalena, illuminating Colombia's complex past, present, and future.

Travelers often become enchanted with the first country that captures their hearts and gives them license to be free. For Wade Davis, it was Colombia. Now in a masterly new book, Davis tells of his travels on the mighty Magdalena, the river that made possible the nation. Along the way, he finds a people who have overcome years of conflict precisely because of their character, informed by an enduring spirit of place, and a deep love of a land that is home to the greatest ecological and geographical diversity on the planet. Only in Colombia can a traveler wash ashore in a coastal desert, follow waterways through wetlands as wide as the sky, ascend narrow tracks through dense tropical forests, and reach verdant Andean valleys rising to soaring ice-clad summits.

Both a corridor of commerce and a fountain of culture, the wellspring of Colombian music, literature, poetry, and prayer, the Magdalena has served in dark times as the graveyard of the nation. And yet, always, it returns as a river of life.

At once an absorbing adventure and an inspiring tale of hope and redemption, Magdalena braids together memoir, history, and journalism to tell the epic story of Colombia.

Wade Davis is the author of twenty books, including One River, The Wayfinders, and Into the Silence, which won the 2012 Samuel Johnson prize, the top award for literary nonfiction in the English language. Explorer-in-Residence at the National Geographic Society from 1999 to 2013, he is currently Professor of Anthropology at the University of British Columbia. In 2016, he was made a Member of the Order of Canada. In 2018 he became an Honorary Citizen of Colombia.

Don George wrote the book on travel writing, literally. His book, Lonely Planet's Guide to Travel Writing, is the best-selling travel writing guide in the world. Don has been a pioneering travel writer and editor for 40 years. He has been the travel editor at the San Francisco Examiner and the San Francisco Chronicle, founder and editor of Salon's Wanderlust travel site, and global travel editor for Lonely Planet. He is currently an editor at large and columnist for National Geographic Traveler and the editor of BBC Travel's Words and Wanderlust section. Don is the cofounder and chairman of the renowned Book Passage Travel Writers and Photographers Conference. He has visited 90 countries and has published hundreds of articles in dozens of magazines, newspapers, and websites worldwide. He has also edited ten award-winning literary travel anthologies. He speaks and teaches regularly at conferences and on campuses around the world, and he is frequently interviewed on TV, radio, and online as a travel expert. He lives in Piedmont, CA. Pico Iyer was born in Oxford, England to parents from India, and he was educated at Eton, Oxford, and Harvard. He is the author of many best-selling books, including Video Night in Kathmandu, The Global Soul, The Lady and the Monk, and The Art of Stillness. Since 1992 he has been based in rural Japan with his longtime sweetheart, while spending part of each year in a Benedictine hermitage in California.

Photo provided courtesy of the author

Magdalena: River of Dreams: A Story of Colombia (Paperback)

The Way of Wanderlust: The Best Travel Writing of Don George (Paperback)