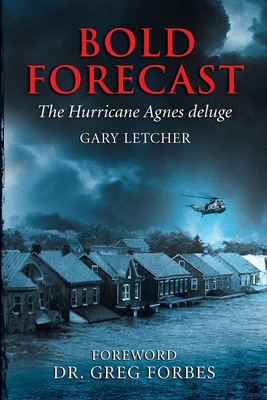 Everyone knew the flood was impossible. But the sentinels warned it was coming.

A vivid saga of courage, sacrifice and survival, Bold Forecast brings home the power of Nature - and the power of ordinary people in the face of epic catastrophe.

When 1972's Hurricane Agnes roared up America's east coast, it brought the most rain and wreaked the worst damage in U.S. history up to that time. The scope of the Agnes floods remains the widest ever, bringing death and destruction across twelve states.

- In upstate New York, the mayor assured his nervous citizens they were safe behind the levees, unaware of the incredible deluge hammering the river's headwaters. The fire chief was the first to die.

- In Maryland, imminent collapse of the biggest dam in the Eastern U.S. threatened to wipe the cities below from the map. Engineers prepared to blow the dam open to relieve the pressure.

Through it all, readers look over the shoulders of scientists at the little-known River Forecast Center, who struggled to predict the path of disaster as their equipment washed away around them.

Founded on meticulous research, Bold Forecast is the first beginning-to-end telling of this timeless tale of Man vs. Nature.