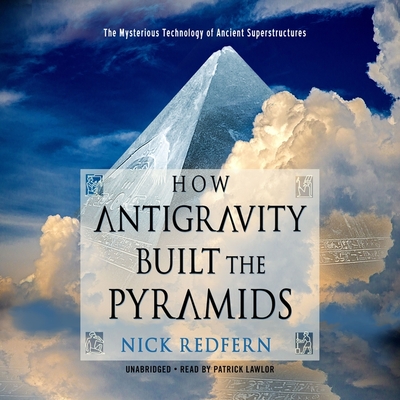 By Nick Redfern, Patrick Girard Lawlor (Read by)
$31.95
Email or call for price

Discover the lost secrets of the ancients.

Throughout history, folklore, and mystery, tales have circulated of massive stones being moved through the air effortlessly, seemingly by means of sound. Bizarre? Well, yes, it is. That doesn't negate the fact that sound was, and still remains, the key to the construction of the pyramids of Egypt, Stonehenge, the stone figures of Easter Island, and the massive stones at Baalbek, Lebanon. Were they the work of ancient humans, of equally ancient extraterrestrials, or of both?

How Antigravity Built the Pyramids delves into such stories and theories as:

The Mayan story of the construction of the Pyramid of the Magician, said to be overseen by a small humanoid who could whistle large stones into place

Redfern argues it was not literally music and whistling that somehow raised stones with the weight of dozens of modern-day cars into the sky. Such a thing is not possible. But music and whistling have one thing in common: sound. That is, acoustics. Almost certainly, acoustic levitation was at the heart of these incredible feats.

No doubt as the centuries passed, the truth of the science behind acoustic levitation was lost and forgotten--and distorted, too--with little left than fanciful tales of music, whistles, curious papyrus, and strange metal rods that could achieve incredible feats in the air.

Today, we are finally starting to get a grasp on this incredible technology, a technology that may have been the work of ancient humans, aliens from faraway worlds--or, perhaps, a combination of the two.