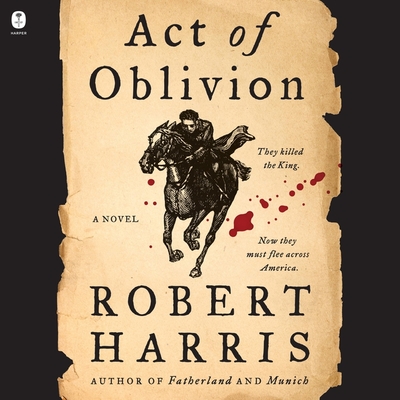 By Robert Harris, Tim McInnerny (Read by)
$41.99
Email or call for price

From the bestselling author of Fatherland, The Ghostwriter, Munich, and Conclave comes this spellbinding historical novel that brilliantly imagines one of the greatest manhunts in history: the search for two Englishmen involved in the killing of King Charles I and the implacable foe on their trail--an epic journey into the wilds of seventeeth-century New England, and a chase like no other.

'From what is it they flee?'

He took a while to reply. By the time he spoke the men had gone inside. He said quietly, They killed the King.

1660 England. General Edward Whalley and his son-in law Colonel William Goffe board a ship bound for the New World. They are on the run, wanted for the murder of King Charles I--a brazen execution that marked the culmination of the English Civil War, in which parliamentarians successfully battled royalists for control.

But now, ten years after Charles' beheading, the royalists have returned to power. Under the provisions of the Act of Oblivion, the fifty-nine men who signed the king's death warrant and participated in his execution have been found guilty in absentia of high treason. Some of the Roundheads, including Oliver Cromwell, are already dead. Others have been captured, hung, drawn, and quartered. A few are imprisoned for life. But two have escaped to America by boat.

In London, Richard Nayler, secretary of the regicide committee of the Privy Council, is charged with bringing the traitors to justice and he will stop at nothing to find them. A substantial bounty hangs over their heads for their capture--dead or alive. . . .

Robert Harris's first historical novel set predominantly in America, Act of Oblivion is a novel with an urgent narrative, remarkable characters, and an epic true story to tell of religion, vengeance, and power--and the costs to those who wield it.