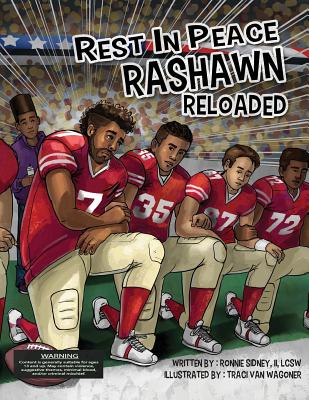 The fatal police shootings of black men in the recent past bring to focus yet again the chain of stigma, shame and silence that engulfs many lives, and entire communities and neighborhoods. A new illustrated comic book that is now helping heal the wounds and show the way forward is "Rest in Peace RaShawn Reloaded" authored by Ronnie Sidney, II, LCSW.

"Rest in Peace RaShawn Reloaded" tells the graphic story of a black teenager shot and killed by a police officer who mistakes his airsoft toy gun for real. This narrative is all too common in America, and the novel brings home the fact that a young, innocent life was snuffed out too soon. Ronnie presents the violence and suffering in a sensitive, easy-to-understand and age-appropriate format for kids. This book is a good way to broach the painful but necessary conversations families across the nation are having with their children, and provides thoughtful discussion points on how to heal the legacy of distrust between African- American communities and the police who are supposed to protect them.

To deal with police brutality towards black teens and adults requires building higher level of social awareness, as well as telling youngsters how to understand and behave safely and reasonably in such situations. "Rest in Peace RaShawn Reloaded", revised version of its previous version released in April, adds new material in the form of five pages a cover. The comic book has been illustrated by Traci Van Wagoner, designed by Kurt Keller, edited by Tiffany Carey Day, Francesca Lyn and Samantha Willis, and has contributions from Laurence Jones and Steve Silverman.