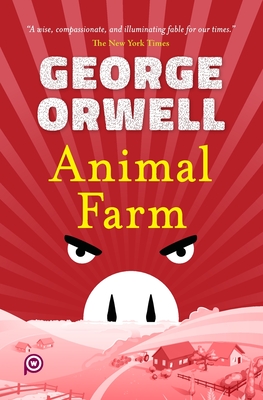 First published in England in August 1945, 'Animal Farm' is a classic satire of the Russian Revolution by George Orwell, an English novelist, essayist, journalist, and critic. It is considered one of Orwell's most remarkable works, and a political fable based on the occurrences of Russia's Bolshevik Revolution and the betrayal of the cause by Joseph Stalin. Orwell's work is distinguished by keen brilliance and wit, a deep awareness of social injustice, intense resistance to totalitarianism, a fascination for clarity in language, and a belief in democratic socialism.

It is the account of the fierce struggle, initiated by the animals, that alters Mr. Jones's Manor Farm into Animal Farm, a wholly democratic society built on the ideology that "All Animals are Created Equal". Out of their intelligence, the pigs: Napoleon, Squealer, and Snowball materialize as leaders of the new community in a subtle evolution that proves disastrous. The pigs form a tyranny even more domineering and cruel than that of their former human masters.

The characters in the novella resemble significant people that influenced the Russian Revolution. These characters act similarly to the real people and actions that were done in the past. Through this book, George Orwell uncovers Stalin's true disposition and evils using a crooked pig named Napoleon that eventually dictates the farm. It is one of the most momentous political texts ever written.