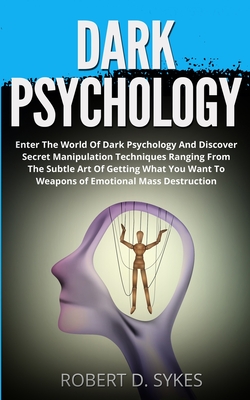 This Book Contains Tactical Street Persuasion Techniques. Warning: The Information In This Book Is Not Sugar-Coated And Doesn't Pull Any Punches.

The power to influence other people's hearts and minds has always been a well-kept secret rarely shared with others and never thought in schools.

Most people think they know when somebody tried to manipulate them. Only a few realize that the constant stream of manipulation, they are exposed to every day, makes it nearly impossible to avoid doing, buying or believing what they want you to.

While most people just sit and believe they know what's going on (while snacking on chips from the brand they were persuaded to buy from), you can turn the tables and become the puppet master yourself.

Because persuading people to do what you want is actually a skill that can be learned.
With this being said author Robert D. Sykes reveals in his new book «Dark Psychology: Enter The World Of Dark Psychology some of the most powerful techniques eagerly used by the ones who will do whatever it takes to get what they want.

You will discover tons of insights and real-life examples to arm you with razor persuasion and manipulation skills that let you gain an unfair advantage.

Here is what you will discover inside this book:

Even if you've been fooled multiple times before and failed to improve your persuasion skills, this book will show you how to gain compliance from anyone in real life with ease.

You will be equipped with an understanding of human nature only a few obtain in their lives.

But once you see behind the curtain of the puppet show there is no coming back.