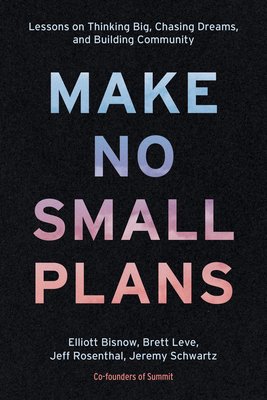 From the founders of the acclaimed Summit event series and community comes the story of their unconventional journey to business success and the hard lessons they learned along the way.

In 2008, with no event production experience and two college degrees between the four of them, Elliott Bisnow, Brett Leve, Jeff Rosenthal, and Jeremy Schwartz became business partners and set out to build a global events company. With passion and tenacity, they began cold calling as many inspiring company founders as they could and tried to convince them to attend their first event. In the beginning, only nineteen people said yes.

Since then, they have grown Summit into a global community with events all over the world, hosting luminaries including Jeff Bezos, Richard Branson, Shonda Rhimes, Brené Brown, Kendrick Lamar, and Al Gore. In 2013, the Summit founders acquired Powder Mountain, the largest ski resort in the United States, with a dream of building a mountaintop town of the future.

In Make No Small Plans, they reveal the triumphs, mistakes, and cornerstone lessons from their journey, which began during the Great Recession and continues today. Alongside teachings from some of the most inspiring entrepreneurs of our time, the authors offer takeaways such as:

• No idea should go unspoken.
• Reputations are earned by the drop and lost by the bucket.
• The road to success is always under construction.
• Become a favor economy millionaire.

Entertaining and empowering, Make No Small Plans shows that anyone can think big and—with a thirst for knowledge, a talented team, and a little humility—accomplish the impossible.

Elliott Bisnow, Brett Leve, Jeff Rosenthal, and Jeremy Schwartz are the founders of Summit, a global company that has produced more than 250 events over the last decade, and the co-owners of Powder Mountain, the largest ski resort in the United States. They were early investors in startups including Uber and Warby Parker, and they are actively involved with Conservation International, Beyond Conflict, and the Anti-Recidivism Coalition. All four are sought-after speakers and have been featured in The New York Times, The Wall Street Journal, The Economist, Bloomberg Businessweek, Time, and Fast Company.