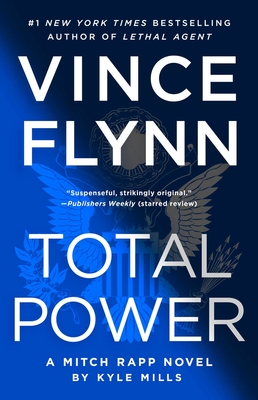 This is book number 19 in the A Mitch Rapp Novel series.

“One of the best thriller writers on the planet.” —The Real Book Spy

In the next thriller in the #1 New York Times bestselling Mitch Rapp series, it’s a race against the clock when ISIS takes out the entire US power grid and throws the country into chaos.

When Mitch Rapp captures ISIS’s top technology expert, he reveals that he was on his way to meet a man who claims to have the ability to bring down America’s power grid. Rapp is determined to eliminate this shadowy figure, but the CIA’s trap fails.

The Agency is still trying to determine what went wrong when ISIS operatives help this cyber terrorist do what he said he could—plunge the country into darkness. With no concept of how this unprecedented act was accomplished, the task of getting the power back on could take months. Perhaps even years.

Rapp and his team embark on a desperate search for the only people who know how to repair the damage—the ones responsible. But his operating environment is like nothing he’s experienced before. Computers and communication networks are down, fuel can no longer be pumped from gas stations, water and sanitation systems are on the brink of collapse, and the supply of food is running out.

Can Rapp get the lights back on before America descends irretrievably into chaos?

This compulsive thriller proves once again that the Mitch Rapp series is “the best of the best when it comes to the world of special ops” (Booklist, starred review).

Kyle Mills is the #1 New York Times bestselling author of twenty-three political thrillers, including Total Power, Lethal Agent, and Red War for Vince Flynn and The Patriot Attack for Robert Ludlum. He initially found inspiration from his father, the former director of Interpol, and still draws on his contacts in the intelligence community to give his books such realism. Avid outdoor athletes, he and his wife split their time between Jackson Hole, Wyoming, and Granada, Spain. Visit his website at KyleMills.com or connect with him on Twitter, Facebook, and Instagram @KyleMillsAuthor.

"One of the best thriller writers on the planet...Daring, original, and unlike anything fans of this franchise have seen before, it’s hard to imagine anyone else delivering a better thriller than TOTAL POWER, the best series entry since CONSENT TO KILL (2005), and a serious contender for best book of the year."
— The Real Book Spy

"In TOTAL POWER, Kyle Mills gives us the suspense and action we’d expect from a Flynn novel as well as some delightfully fun moments that are uniquely Mitch Rapp."
— Don Bentley, New York Times bestselling author of HOSTILE INTENT