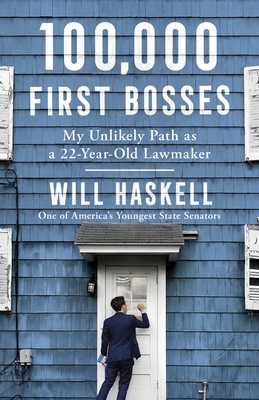 The underdog story of Will Haskell, who became a Democratic state Senator in 2018 at age twenty-two—taking on an incumbent who had been undefeated for Haskell’s entire life and earning an endorsement from President Obama—and is determined to pave the way for his peers to transform government from the bottom up.

President Obama left office with these parting words for Americans: “If you’re disappointed by your elected officials, grab a clipboard, get some signatures, and run for office yourself.” Twenty-two-year-old Will Haskell decided to do just that. If he ran for office and won, he would become the youngest state Senator in Connecticut history.

For years, Haskell’s hometown had reelected the same politician who opposed passing paid family leave, fought increases in the minimum wage, and voted down expansions of voting rights. Haskell’s own vision for Connecticut’s future couldn’t be more different, and he couldn’t stand the idea of an uncontested election. In 2018, he would be a college grad looking for his first job. Why not state Senator?

When Haskell kicks off his campaign in the spring of his senior year, he’s an unknown college kid facing a popular incumbent who’s been in office for over two decades—as long as Haskell’s been alive. Haskell’s campaign manager is his roommate and his treasurer is his girlfriend’s mom. He doesn’t have any professional experience. But he does have a powerful message: there’s no minimum age to being on the right side of history.

Six months later, Haskell’s shocking upset victory gives him a historic seat in the state Senate and the responsibility to serve the 100,000 constituents in his district. Like any first job, his first term as a legislator is filled with trial and error. Creating a program that funds free tuition at Connecticut’s community colleges—nice work. Falling asleep on the senate floor—needs improvement.

In the tradition of Pete Buttigieg’s Shortest Way Home and Greta Thunberg’s No One Is Too Small to Make a Difference, 100,000 First Bosses is the story of how one twentysomething candidate waged the campaign of his young life, fought for change at the state capitol, and proved that his generation is ready to claim a seat at the table.

Will Haskell was elected in 2018 to represent seven towns, including his hometown, in the Connecticut State Senate. Just a few months after graduating from college, he and his roommate-turned-campaign manager unseated a Republican incumbent who had been in the legislature for longer than Will had been alive. Their campaign activated an army of young volunteers who were energized by the fight to end gun violence, and together they broke a tie in the Senate by flipping the district Blue. In the Senate, Will serves as the Chair of the Transportation Committee and the Vice Chair of the Government Administration and Elections Committee. His spent his first term focusing on college affordability, transportation improvements, and voting rights. In 2019, he helped create Connecticut’s free community college program, so that every high school graduate has an opportunity to pursue a degree. He lives in Westport, Connecticut, and is still dating his lab partner from high school physics. 100,000 First Bosses is his first book.

“Will Haskell proves that young people are never to be underestimated. Uplifting and funny, 100,000 First Bosses is an inspiring and wise blueprint for how you can change the world. Haskell shows how you can get engaged and fight for the future you want.”
—Tammy Duckworth

“Will Haskell’s story illustrates that he and his generation are not only ready to use their voices to drive change—they are ready to lead.”
—Al Gore

“Will Haskell’s story is a call to action for young people to engage fully in public life at this critical moment for our democracy and our planet.”
—Jon Ossoff

“If one of your former students, a senior in college, walked into your office to tell you he was running for the State Senate that fall, a plausible reaction might be, ‘Are you kidding?’ But when Will Haskell laid out his plans to me in January of 2018, they made perfect sense because I knew he could out-work and out-think even the most experienced politicians. Here is his story—thoughtfully, engagingly, and honestly told—and it should serve as an inspiration to his 100,000 bosses and to young people everywhere who take their responsibilities to democracy seriously and yearn to make a difference.”
—E. J. Dionne Jr., author of Our Divided Political Heart and Code Red

“Every young person considering a run for office—or just looking for a more meaningful way to engage in our democracy—should pick up Will’s book. It’s a thoughtful, insightful, and as befits a rising star in Connecticut politics, inspiring. You’ll love it!”
—Amanda Litman, co-founder, Run for Something

“Refreshingly candid and optimistic, this account offers much-needed hope to all Americans and especially to the politically underrepresented younger generations seeking change in a world increasingly hostile to their pursuits of health, wealth, and happiness. Inspiring reading for aspiring politicians or anyone seeking substantive change.”
—Kirkus Reviews

“[Haskell's] passion is infectious, and he provides plenty of instructive insider details. This earnest and enthusiastic account is a welcome introduction to politics for young people interested in making their voices heard.”
—Publishers Weekly