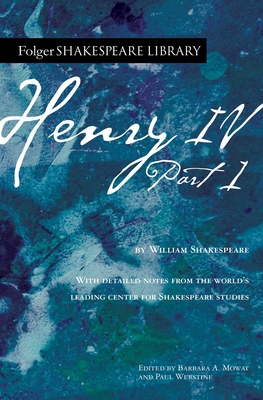 The authoritative edition of Henry IV, Part 1 from The Folger Shakespeare Library, the trusted and widely used Shakespeare series for students and general readers.

Family relationships are at the center of Henry IV, Part 1. King Henry IV and Prince Hal form one major father-son pair, with Henry in despair because Hal lives a dissolute life. The father-son pair of Hotspur (Lord Henry Percy) and his father, the Earl of Northumberland, is in seeming contrast; the king envies Northumberland “his Harry,” wishing he could claim the gallant Hotspur as his own. Meanwhile, Hal has entered into a quasi-father-son relationship with a disreputable but amusing knight, Sir John Falstaff.

Another strand of action centers on still more family relationships. Hotspur’s stand against Henry focuses on Hotspur’s brother-in-law, Mortimer. Mortimer, who fought against the Welsh magician Owen Glendower, was defeated and captured and has married Glendower’s daughter. King Henry pronounces Mortimer a traitor whom he will not ransom. Hotspur, in declaring war on Henry, sees himself as fighting for Mortimer, his wife’s brother.