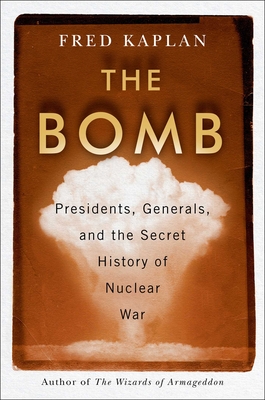 From the author the classic The Wizards of Armageddon and Pulitzer Prize finalist comes the definitive history of American policy on nuclear war—and Presidents’ actions in nuclear crises—from Truman to Trump.

Fred Kaplan, hailed by The New York Times as “a rare combination of defense intellectual and pugnacious reporter,” takes us into the White House Situation Room, the Joint Chiefs of Staff’s “Tank” in the Pentagon, and the vast chambers of Strategic Command to bring us the untold stories—based on exclusive interviews and previously classified documents—of how America’s presidents and generals have thought about, threatened, broached, and just barely avoided nuclear war from the dawn of the atomic age until today.

Kaplan’s historical research and deep reporting will stand as the permanent record of politics. Discussing theories that have dominated nightmare scenarios from Hiroshima and Nagasaki, Kaplan presents the unthinkable in terms of mass destruction and demonstrates how the nuclear war reality will not go away, regardless of the dire consequences.

Fred Kaplan is the national-security columnist for Slate and the author of five previous books, Dark Territory: The Secret History of Cyber War, The Insurgents: David Petraeus and the Plot to Change the American Way of War (a Pulitzer Prize finalist and New York Times bestseller), 1959, Daydream Believers, and The Wizards of Armageddon. He lives in Brooklyn with his wife, Brooke Gladstone.

"Bracing clarity....[A] rich and surprisingly entertaining history of how nuclear weapons have shaped the United States military and the country's foreign policy....Kaplan has a gift for elucidating abstract concepts, cutting through national security jargon and showing how leaders confront (or avoid) dilemmas."—New York Times Book Review

"[An] excellent history of nuclear war and its long shadow....he uses more recently released classified documents to focus on the actual policymakers, describing with lucidity and a healthy dose of dark irony their trips down the rabbit hole....Kaplan’s book is a timely reminder of the need to take a deep breath before thinking the unthinkable."—Washington Post

"[Kaplan] distinguishes himself with tight, journalistic accounts of what one might term the 'high nuclear politics' of D.C. policy makers, military men, public intellectuals and government officials, especially as they quarreled behind closed doors. Mr. Kaplan pulls together tales from candid interviews with participants, while also drawing on declassified (and often eye-popping) documents from presidential libraries, Department of Defense files and State Department records....Mr. Kaplan’s forte is with the primary stuff, not the secondary literature....The author is a punchy and sometimes even graceful stylist....'The Bomb' thus unfolds at a speedy pace....The stakes are enormous, it seems; no other form of conflict and warfare counts; really, no other form of history counts. Mesmerized by the dramatic detail, the reader might find it hard to disagree....“The Bomb” is a work that should make thoughtful readers even more thoughtful. But it is not a book for the faint of heart."—Wall Street Journal

“With its stunning, new, in-the-room revelations, and with Fred Kaplan’s deep knowledge of nuclear strategy, The Bomb is the best overview yet of the world's continuing struggle to come to terms with the threat of nuclear war.”—Richard Rhodes, Pulitzer Prize-winning author of The Making of the Atomic Bomb and Arsenals of Folly

“Fred Kaplan is the world’s preeminent Dr. Strangelove-whisperer, and The Bomb is the smartest, most riveting, and up-to-date history of how US leaders, military and civilian, have thought the unthinkable. The chapter on Trump and nuclear weapons is nothing less than alarming.”—Timothy Naftali, author of George H.W. Bush and co-author of Khrushchev’s Cold War

“In The Bomb, Fred Kaplan has delivered a timely, lively, highly readable account of how Presidents from Truman to Trump have prepared for nuclear war—a history that is as deeply informed as it is utterly alarming.”—Steve Coll, Pulitzer Prize-winning author of Ghost Wars and Directorate S

“With powerful anecdotes and a wealth of historical detail, Fred Kaplan tells the story of the men and women who found themselves both appalled and entranced by the fearful, mad logic of nuclear war from the aftermath of Hiroshima to the present day. The Bomb is a frightening but necessary read."—Rosa Brooks, author of How Everything Became War and the Military Became Everything: Tales from the Pentagon

"The Bomb is like the Pentagon Papers for U.S. nuclear strategy. Kaplan has the insider stories of an investigative journalist, the analytic rigor of a political scientist, and the longer-term perspective of a historian. Insightful and important.” —SCOTT Sagan, professor of political science at Stanford University and chairman of the American Academy of Arts & Sciences’ Committee on International Security Studies

"The Bomb is like the Pentagon Papers for U.S. nuclear strategy. Kaplan has the insider stories of an investigative journalist, the analytic rigor of a political scientist, and the longer-term perspective of a historian. Insightful and important.” —SCOTT Sagan, professor of political science at Stanford University and chairman of the American Academy of Arts & Sciences’ Committee on International Security Studies