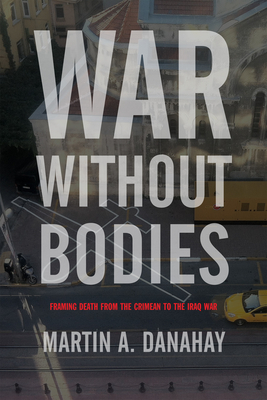 By Martin Danahay
for information about purchasing this book, please contact orders@bookpassage.com

Historically the bodies of civilians are the most damaged by the increasing mechanization and derealization of warfare, but this is not reflected in the representation of violence in popular media. In War Without Bodies, author Martin Danahay argues that the media in the United States in particular constructs a “war without bodies” in which neither the corpses of soldiers or civilians are shown. War Without Bodies traces the intertwining of new communications technologies and war from the Crimean War, when Roger Fenton took the first photographs of the British army and William Howard Russell used the telegraph to transmit his dispatches, to the first of three “video wars” in the Gulf region in 1990-91, within the context of a war culture that made the costs of organized violence acceptable to a wider public. New modes of communication have paradoxically not made more war “real” but made it more ubiquitous and at the same time unremarkable as bodies are erased from coverage. Media such as photography and instantaneous video initially seemed to promise more realism but were assimilated into existing conventions that implicitly justified war. These new representations of war were framed in a way that erased the human cost of violence and replaced it with images that defused opposition to warfare.

Analyzing poetry, photographs, video and video games the book illustrates the ways in which war was framed in these different historical contexts. It examines the cultural assumptions that influenced the reception of images of war and discusses how death and damage to bodies was made acceptable to the public. War Without Bodies aims to heighten awareness of how acceptance of war is coded into texts and how active resistance to such hidden messages can help prevent future unnecessary wars.

MARTIN A. DANAHAY is a professor of English at Brock University in Canada. He is the author of Gender at Work in Victorian Culture: Literature, Art and Masculinity and A Community of One: Masculine Autobiography and Autonomy in Nineteenth Century Britain.

"War Without Bodies contributes to an important and ongoing effort to understand—and to challenge— the myriad ways in which a culture of war has been historically normalized as a function of “new” technologies of representation.  Martin Danahay illustrates how the illusion of a “war without bodies” complicates our capacity to engage the trauma of war by sanitizing its violence and undermining the very possibility of grieveable bodies, whether soldiers or civilians.
— John Louis Lucaites

"Danahay offers a pacifist's lament, not only for the victims of war, but for their systematic erasure from its representation. War Without Bodies documents the history of this practice, explores its lethal consequences, and urges its readers toward an alternative visuality."
— Rebecca Adelman

"You might not think to draw a line from Tennyson to Dungeons and Dragons, but that's the gift of this book. With great erudition, Danahay carefully folds historical epochs and disparate practices into one another, adding layers of richness to the old question of how war has figured the body."
— Roger Stahl