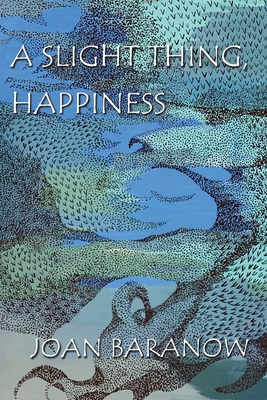 "We think back through our mothers if we are women," Virginia Woolf declares in A Room of One's Own, and certainly Joan Baranow embraces a woman-centered poetics in A Slight Thing, Happiness. In this volume of poetry, Baranow explores the many phases of motherhood, beginning with her struggle with infertility treatments, toxemia of pregnancy, and the premature births of her sons. The poems that open the book narrate those early days of disappointment, hope, and gratitude with vivid images of nature as the poet negotiates her way through a harsh clinical environment.

In section II Baranow looks back to women who have gone before, searching for guidance on how best to be a mother while losing her own mother to cancer. The loss of one's mother, both literally and spiritually, is a motif that recurs throughout the book. The elder women of folktale, for instance, are presented as fierce females who have tragically lost control over their lives. In "Grandma" the speaker remembers how "Once, she had carried an axe. / Once, she had flayed the little doves / so plentiful here, the specks of their eyes / bright onyx gems...." Like the grandmother in "Little Red Riding Hood," she knows that age has taken her strength and "she's the ghost now, isn't she, / blasted, blown, her legs like twisted rags." In "Sergeant Marge," a war veteran no longer able to care for herself is tied to a hospital bed, straining against the system that insists on caring for her while taking away her agency. Even the poet's own mother, speaking from the grave, has nothing but consolation to offer her grieving daughter.

Although her female forebears find themselves weakened by age, their resistance to forces that restrain them is inspiring. The poet learns that casualness in the face of fear may be a model for motherhood. This third section of the book describes the world as seen by her children, a world "with or without wings," where death hovers on the margins of their awareness. Baranow mourns the ordinary deaths that occur as a natural part of life-a drowned rat, a dead fawn-yet she encourages her toddler to bravely "walk atop a stone wall, pigeon-toed." Here are poems that celebrate the heedless energy of childhood even while death remains ever-present in the poet's mind.

The last section of the book moves outward as the demands of motherhood shift into a larger social sphere and the poet reconnects with friendships, marriage, and her own childhood memories. Nature remains the vital core of Baranow's relationship to life and to her image-making. She remembers when her "soul had a chance to travel / where the land was useless- / just fields of abandoned apple trees" and how she once released a cloud of termites that were immediately snatched up by dragonflies, "swooping in / like chunky bombers." Nature is physically and morally instructive, from the intimate details of reproductive life to the stars that "kept their course." Despite her admission, "I know so little about / what I love," the poet and her teenage son find themselves momentarily confiding in each other, wrapped under the night sky in the womb-like warmth of a hotel hot tub.

In A Slight Thing, Happiness, readers gain a look into reproductive experiences that are rarely found in poems and are rewarded with the miracle of ordinary family life. As the title poem suggests, the sight of a red squirrel toppling into a bird feeder-slight as that may be-can be enough for happiness.