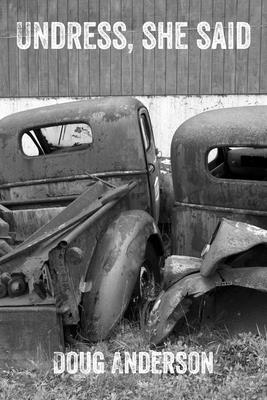 In Doug Anderson's newest collection, Undress, She Said, we accompany a speaker undaunted by the complex reckonings of history, evolving relationships, and an aging body, a speaker that, besieged by a storm, resolves to "set out into it, the wind / playing the rigging like a harp." Over and over in these pages, Anderson makes music of the gales and rain and turbulent sea. These poems voyage from the subtle violences of a religious upbringing to complex remembrances of time served in the Vietnam War to contemporary emergencies of real and political plagues. Yet, no matter the subject, compassion rudders these lyrics as they turn always and at last to myriad beloveds-the enigmatic Angel of Death, literary and mythological influences, kind strangers, the constantly elusive and elusively constant moon. These words reach out to the reader the way the poet addresses frozen joy from the confines of winter: "Red berry trapped in ice, / let me touch you."

Doug Anderson's first book of poetry, The Moon Reflected Fire, won the Kate Tufts Discovery Award in 1995, and Blues for Unemployed Secret Police received a grant from the Eric Mathieu King Fund of the Academy of American Poets. His memoir Keep Your Head Down: Vietnam, the Sixties, and a Journey of Self-Discovery was published by W. W. Norton in 2009. His work has appeared in many literary journals including Asheville Poetry Review, Field, Nine Mile, Ploughshares, Poetry, Southern Review, Massachusetts Review, and Virginia Quarterly Review. He has received fellowships and grants from the Massachusetts Cultural Council, the National Endowment for the Arts, and other funding organizations. In addition to poetry and creative nonfiction he has written plays, screenplays, and journalism. His most recent book of poems is Horse Medicine (Barrow Street Press, 2015). He has taught in the Pacific University of Oregon and Bennington College MFA programs, and he is a teaching affiliate of the Joiner Institute for the Study of War and Its Social Consequences at UMASS Boston. He has written critical work for the Boston Globe, Counterpunch, the New York Times Book Review, and the Times Literary Supplement (London).

"In this time of plague and an injured planet, we need poems that play for the highest stakes. Whether he's writing about love, war, art, or the myths we sell ourselves, Doug Anderson takes on the whole catastrophe, and does so with passion and compassion, tenderness and rage. Simultaneously death-conscious and wide-open-hearted, Undress, She Said is a book that could only have been written by a man who's been alive for a long time. Plainspoken, precise, frequently surprising, and unabashedly intimate, these poems are that rare thing: necessary to our understanding of ourselves and our world."
-Chase Twichell

"It's the tenderness of Doug Anderson's magnificent, wildly imaginative and humane poems that's so startling, so inured have some of us become to the insults of the Late Incorporated Anthropocene. The great gift of his poems is to shock my heart out of an expectation of despair. Anderson writes without a trace of self-pity about becoming old, and of needing to explore the texture of death. This book doesn't present becoming peaceful in old age as a virtue. Instead, it continues to believe in 'us' enough to express fury about the ways we're inhuman toward others and ourselves. It thinks we can do better. Full of wit and music, the language here crackles, coruscates with light and intensity, suffused with gratitude for the beauties of the phenomenal world and for love even in its distressing disguise as death. Undress, She Said, echoes with voices….A person a thousand years ago would have felt the truth of these poems, or a thousand years from now, so rooted they are in the story, the work, of being human. On the field of battle between judgement and forgiveness, this book renders the deep service of recalling ourselves to ourselves."
-Patrick Donnelly

“Anderson’s luminous poems light the caves of our inner lives, touch the silk of the waning body, the skeins of loss, and death, who leaves her smoky perfume in every room, tattoos on her arms as she drives, crows in the backseat.  He re-visits the war, that place where ‘The sun / turns the fog to spun glass.’ A place he returns to years later where he can ‘peel a green orange and find gold.’ He pays homage to the great masters of poetry, to love, and to the fallen myths that trail us into the end of our days, undressing us all.”
-Dorianne Laux