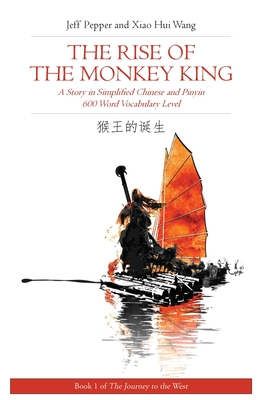 "The Rise of the Monkey King" is the first book in the "Journey to the West" series of stories by Jeff Pepper and Xiao Hui Wang. Other titles include "Trouble in Heaven", "The Immortal Peaches" and "The Young Monk".

Sun Wukong, the Handsome Monkey King, is one of most famous characters in Chinese literature and culture. His legendary bravery, his foolish mistakes, his sharp-tongued commentary and his yearning for immortality and spiritual knowledge have inspired hundreds of books, television shows, graphic novels, video games and films.

The full story of Sun Wukong's adventures is told in Journey To The West, an epic 2,000 page novel written in the 16th Century by Wu Cheng'en. Journey To The West is probably the most famous and best-loved novel in China and is considered one of the four great classical novels of Chinese literature. Its place in Chinese literature is roughly comparable to Homer's epic poem The Odyssey in Western literature. Wikipedia sums up the book's role perfectly, saying "Enduringly popular, the tale is at once a comic adventure story, a humorous satire of Chinese bureaucracy, a spring of spiritual insight, and an extended allegory in which the group of pilgrims journeys towards enlightenment by the power and virtue of cooperation."Journey To The West is a very, very long story, consisting of a hundred chapters. It is loosely based on an actual journey by the Buddhist monk Xuanzang who traveled from the Chinese city of Chang'an westward to India in 629 A.D. and returned 17 years later with priceless knowledge and texts of Buddhism. Over the course of the book Xuanzang and his companions face the 81 tribulations that Xuanzang had to endure to attain Buddhahood.

This book, The Rise of the Monkey King, covers the events in the first two chapters of this epic story. We learn how the little stone monkey is born, becomes king of his troop of monkeys, leaves his home to pursue enlightenment, receives the name Sun Wukong (literally, "ape seeking the void") from his teacher, and returns home to defend his subjects from a ravenous monster. Later books in this series tell more stories from the life of this famous monkey and his companions.

Because of this story's importance in Chinese culture, we've made every effort to remain faithful to the original while retelling it in simple language suitable for beginning Chinese learners at the HSK 3 level. We have tried to not add or change anything, though of course we've had to leave out a lot of detail. Wherever we had to use a word or phrase not contained in the 600-word HSK 3 vocabulary (which for example does not include the word "monkey" ) or that has not entered common usage since the HSK lists were created, those new words are defined in footnotes on the page where they first appear. New compound (multi-character) words and expressions are, whenever possible, chosen so that they use characters already in HSK 3. An English version of the story is included for reference at the end, as well as a complete glossary.

In the main body of the book, each page of Chinese characters is matched with a facing page of pinyin. This is unusual for Chinese novels but we feel it's important. By including the pinyin, the English version and the glossary, we hope that every reader, no matter what level of mastery they have of the Chinese language, will be able to understand and enjoy the story we tell here.

The story is written, as much as possible, using the 600 word vocabulary of HSK 3. It is presented in simplified Chinese characters and pinyin, and includes an English version and complete glossary. A free Chinese language audiobook is also available on YouTube, on the Imagin8 Press channel.