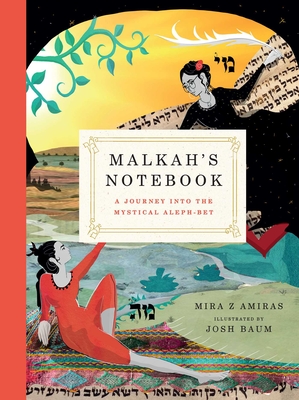 "Musing through a space that’s somewhere between an illuminated, psalmic narrative poem and a graphic novel attuned to the soul, Malkah’s Notebook is an intimate trip through Jewish mysticism and feminist theology." —Foreword Reviews

Malkah is a child when her father tries teaching her to read Torah. But they don’t get very far. As Malkah studies, her questions multiply. She discovers an earlier, hidden story of creation within the Hebrew Aleph-Bet letters in the first line of Genesis. And a door opens. Malkah’s discovery takes her on a lifelong journey in search of her beginnings—into Jewish mystical texts, far-off places, archaeological digs, ancient gods, and ultimately into the nature of existence itself.

Mira Z. Amiras was raised on her mother’s accounts of the Inquisition and Holocaust, and her father’s tales of the Hebrew aleph bet letters and their role in the creation of the universe. She is Professor Emerita of Comparative Religion and Middle East Studies at San Jose State University. Mira received her PhD in anthropology from UC, Berkeley. She is author of Development and Disenchantment in Rural Tunisia, and writer and producer of the animated movie, The Day Before Creation. She lives in San Francisco with her family.

Josh Baum was born in London and grew up in Bristol. He studied painting at the Masana School in Barcelona then moved to Sfat to study in a Hasidic yeshivah where he trained as a Hebrew scribe. After writing a Torah scroll in Jerusalem, Josh attained an MA in Fine Art from Central St Martins in London, for which he was awarded the Future Map prize. In his work as both artist and scribe, he explores the Hebrew letters as sacred signs as well as objects of profound beauty. Josh is a published author and illustrator and lives in Mitzpe Ramon, Israel, where he is director of the art school.

"Difficult to describe, a quick read of this book is not enough, rather years of reading and analyzing the text and the highly detailed illustrations would be in order for this unique work." —Kathy Bloomfield, Association of Jewish Libraries

"Both visually captivating and profoundly stirring, Malkah’s Notebook perfectly captures the woman’s journey— You will come away asking questions you have never thought to ask and perhaps starting to seek in places you had never thought to enter." —Natalie Reid, Author of The Spiritual Alchemist: Working with the Voice of your Soul

"Musing through a space that’s somewhere between an illuminated, psalmic narrative poem and a graphic novel attuned to the soul, Malkah’s Notebook is an intimate trip through Jewish mysticism and feminist theology."--Foreword Review

"Malkah’s Notebook...is an inspiring celebration of the Hebrew alphabet." — Eugenia Koukounas, The Jewish Voice and Opinion

"Stunning visually, inspiring and deepening…a masterful depiction of a spiritual journey, of a life and a life’s work, of the holiness of questions, and of the magnificent harmony of many mystical traditions all presented with tenderness and love." —Rabbi Lavey Yitzchak Derby, Omek HaLev Center for Jewish Spiritual Learning and Practice

"Malkah’s Notebook is a fabulous piece of art, with food for thought in every image, letter, word, and line. Storytelling filled with new perspectives, full of imagination, inviting us to open our minds on what we thought we knew."— Yair Dalal, Mizrachi composer, musician, and Arab-Israeli peace activist

“An inspiring journey into the realm of Kabbalah. The Day before Creation succeeds in balancing the new and the ancient, showing us how to imbibe traditional wisdom and engage in our own free-spirited discovery.”—Daniel Matt, Author of God and the Big Bang, The Essential Kabbalah, and the multi- volume annotated translation, The Zohar: Pritzker Edition

"Malkah’s Notebook is a book to be savored." —Rabbi Elisheva Salamo, San Francisco and Johannesburg

"Malkah’s Notebook: A Journey into the Mystical Aleph-Bet shares the beauty of language, its becoming, its form, its meaning, and its wonder to fill the journey of life." --Beowulf Sheehan, author and photographer