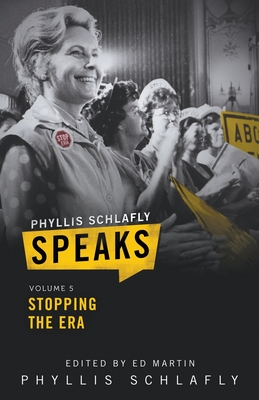 In the early 70s, on the heels of the Civil Rights Movement, equal rights sounded so good. But the devil was in the details of the Equal Rights Amendment (ERA). For ERA were three Presidents, nearly all of Congress and most governors, the media, and loud feminists. The opposition to ERA was Phyllis Schlafly and her band of wives and mothers.

This book includes some reference to how Phyllis formed her army and maintained it. But it is more about her message. In crystal clear language, Phyllis laid out the reasons to oppose ERA and how to argue the opposition. Her Phyllis Schlafly Report from February 1972 might be the most powerful pamphlet since Thomas Paine--it was passed along from state house to state house and described as "what beat ERA" more than once.

But her messaging skills did not stop at writing. She taught her team how to lead in public. Her own role especially in earned media was accelerated by the scores of appearances on The Phil Donahue Show and culminating with the famous Meet The Press appearance from Houston in 1977. While the government sponsored National Women's Conference met across town led by Bella Abzug and others, Phyllis pulled tens of thousands of people to her own conference. The images of pro-abortion radicals at Abzug's event contrasted with Phyllis' regular American women rocketed across the media and nation and are often cited as turning the tide in the fight.

In fact, and much to the chagrin of the feminists, Phyllis was the greatest American woman. She used to say she "had it all--just not all at once" and she meant it. She worked her way through college testing ammunition during World War II. With a graduate degree from Harvard, she was an early employee of the American Enterprise Institute in D.C. quickly returned to her hometown of St. Louis to manage a successful campaign for Congress at 24 years old.

A few years later, she was a married housewife in Alton, Illinois. She started her big family--six children--and settled into a not-so-quiet life. By her early 40s, she was a world-renowned expert on the threat of Soviet Communism and writing books with leading military leaders on the "strategic balance" and the need for a Space missile defense program. She launched the conservative movement with A Choice Not An Echo which eventually yielded President Ronald Reagan.