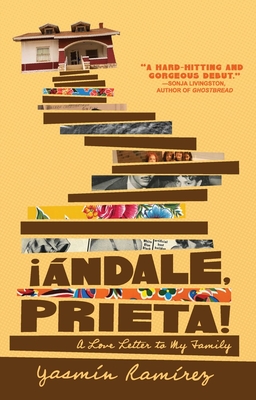 This beautifully open coming-of-age memoir by a Mexican American debut writer doubles as a love letter to the tough grandmother who raised her.

When I tell people who don't speak Spanish what prieta means--dark or the dark one--their eyes pop open and a small gasp escapes ... How do I tell them that now, even after the cruelty of children, Prieta means love? That each time Prieta fell from my grandmother's lips, I learned to love my dark skin.

No one calls me that anymore. I miss how her words sounded out loud.

My Ita called me Prieta. When she died, she took the name with her.

Anchored by the tough grandmother who taught her how to stand firm and throw a punch, debut author Yasm n Ram rez writes about the punches life has thrown at her non-traditional family of tough Mexican American women.

Having spent years of her twenties feeling lost--working an intensely taxing retail job and turning to bars for comfort--the blow of her grandmother's death pushes Yasm n to unravel. So she comes home to El Paso, Texas, where people know how to spell her accented name and her mother helps her figure out what to do with her life. Once she finally starts pursuing her passion for writing, Yasm n processes her grief by telling the story of her Ita, a resilient matriarch who was far from the stereotypical domestic abuelita. Yasm n remembers watching boxing matches at a dive bar with her grandmother, Ita wistfully singing old Mexican classics, her mastectomy scar, and of course, her lesson on how to properly ball your fist for a good punch. Interviewing her mom and older sister, Yasm n learns even more about why her Ita was so tough--the abusive men, the toil of almostliterally back-breaking jobs, and the guilt of abortions that went against her culture.

Expertly blending the lyrical prose of a gifted author with the down-to-earthtone of a close friend, this debut memoir marks Ram rez as a talented new author to watch. Her honesty in self-reflection, especially about periods where she felt directionless, and her vivid depictions of a mother and grandmother who persevered through hard knocks, offers vulnerable solidarity to readers who've had hard knocks of their own.