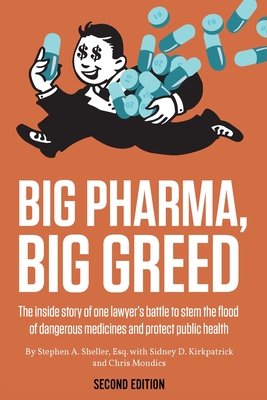 Throughout his distinguished legal career, Stephen Sheller has relished the role of the underdog, evincing a sharply honed sense of fair play and justice.

Early in his career, he represented Black Panthers in Philadelphia when they were arrested on trumped up murder and conspiracy charges. Later, he was in the vanguard of lawyers who took on the tobacco industry in the 1990s and he reprised that strategy a few years later in targeting Big Pharma for its harmful products and their deleterious effects on public health.

In Big Pharma, Big Greed The inside story of one lawyer's battle to stem the flood of dangerous medicines and protect public health Sheller tells a tale that is at once deeply personal but also with wide repercussions for the U.S. health care system and the hundreds of millions of Americans whose lives literally depend on it.

Decades of litigating against the pharmaceutical industry taught Sheller one irreducible lesson: In too many instances, unneeded and at times dangerous drugs are foisted on the public without adequate warning as to risks, all in the service of boosting industry profits. All too often, achieving block buster status for a patent protected medication becomes an end in itself, as Big Pharma companies manipulate clinical trial data, draft scholarly articles for friendly physicians often in their pay, and market their drugs for uses that never had been approved by the federal Food and Drug Administration.

This last practice proved to be something of an Achilles Heel for the industry. In litigation that resulted in settlement and fines in the billions, companies such as Eli Lilly acknowledged marketing drugs off label to a broad range of patients for whom the medications had never been approved. Sheller's litigation formed the basis for these settlements and the effort is ongoing. He and other plaintiffs' lawyers now are suing Janssen Pharmaceuticals for the adverse impacts of its drug, Risperdal, a second generation anti-psychotic that Sheller and others allege is linked to the growth of female breast tissue in young boys and men. Already there have been several big jury verdicts against Janssen with hundreds of more cases yet to be tried.

In the book, Sheller not only recounts his major litigation battles but also makes sweeping proposals for industry reform. To restore regulatory credibility, Sheller proposes that responsibility for testing new medicines be taken away from the industry and given over to hospitals and other public entities partnering with government regulators. Pharmaceutical companies that betray the public trust would risk government- initiated dissolution. Harsh medicine to be sure, but Sheller believes entirely appropriate to the underlying malady.