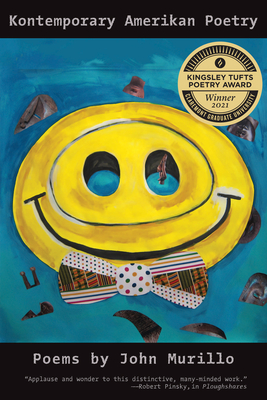 John Murillo’s second book is a reflective look at the legacy of institutional, accepted violence against Blacks and Latinos and the personal and societal wreckage wrought by long histories of subjugation. A sparrow trapped in a car window evokes a mother battered by a father’s fists; a workout at an iron gym recalls a long-ago mentor who pushed the speaker “to become something unbreakable.” The presence of these and poetic forbears—Gil Scott-Heron, Yusef Komunyakaa—provide a context for strength in the face of danger and anger. At the heart of the book is a sonnet crown triggered by the shooting deaths of three Brooklyn men that becomes an extended meditation on the history of racial injustice and the notion of payback as a form of justice.

John Murillo is the author of the poetry collections, Up Jump the Boogie (Cypher 2010, Four Way Books 2020), finalist for both the Kate Tufts Discovery Award and the Pen Open Book Award, and Kontemporary Amerikan Poetry (Four Way 2020).  His honors include two Larry Neal Writers Awards, a pair of Pushcart Prizes, the J Howard and Barbara MJ Wood Prize from the Poetry Foundation, and fellowships from the National Endowment for the Arts, the Bread Loaf Writers Conference, Fine Arts Work Center in Provincetown, Cave Canem Foundation, and the Wisconsin Institute for Creative Writing.  Recent poems have appeared, or are forthcoming, in such publications as American Poetry Review, Poetry, and Best American Poetry 2017, 2019, and 2020.  He is an assistant professor of English and director of the creative writing program at Wesleyan University and also teaches in the low residency MFA program at Sierra Nevada University.  He lives in Brooklyn.

“There is in John Murillo’s art a dogged Americanness, a poet determined to assert himself within an America that has sought to deny his song and the songs from the rich African American tradition. And what songs these are! They are songs of irresistible vulnerability, tough truth-telling, cutting wit, and formal command. Kontemporary Amerikan Poetry is a signature event in American poetry.”
—Kwame Dawes

“John Murillo’s Kontemporary Amerikan Poetry is a lyric burst of virtuosity and passion long in coming, something between song and prayer, centered on a fifteen-sonnet redoublé on the subject of murderous racism and the rage that pushes against it, the whole of the book becoming an ars poetica for memory as noose and history as burning church. Murillo is a poet for his time, equal to its urgency, and graced are we to have him among us in this time of need.”
—Carolyn Forché

“John Murillo’s stunning new collection speaks hard truths about the violence that afflicts our communities, our bodies, and our stories. Yet over this troubling arena, shaped by hostile social and political climates, a saving grace arises: Murillo’s unfettered ability to get at the heart of the wound, giving us words that empower us to transcend the pain.”
—Rigoberto González

"In this clear-eyed collection of highly referential, yet decidedly grounded poems, widely acclaimed writer Murillo adopts a deceptively conversational tone to address violence in Black communities, and the broad landscape of American poetics....Murillo proves himself to be steeped in the traditions of American poetry, carving his own path and curating his own canon...."
— Diego Báez

"...These poems juxtapose bruising firsthand experience against dry conceptual categories (“On Lyric Narrative,” “On Confessionalism”) with a dexterous sense of rhythm and internal and end rhyme as influenced by The Notorious B.I.G. and Elizabeth Bishop. Murillo’s rage against stereotypes and systemic injustice burns through these poems..."
— Publishers Weekly

"In his new collection (after Up Jump the Boogie), Murillo uses conversational but carefully crafted language to articulate the pure pain of living, particularly in a world contorted by institutional racism, and how he works daily to save himself."

"...What a powerful book this is, told in a tone without trembling, nor any bravado. Lines of it will linger on your retina afterwards like these poems have been shown to you, in lamp light, or fire."
https://lithub.com/lit-hubs-most-anticipated-books-of-2020/2/?single=true&fbclid=IwAR26dSQEJrbbw0I2F_HX2wjNRfJ1KdN2tOR8QDcOTBuBzsv6aiqApeu_eFo
— John Freeman