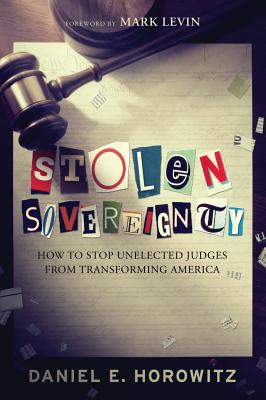 By Daniel Horowitz, Mark Levin (Foreword by)
$25.95
Email or call for price

We are confronted with a jarring reality that the Left has succeeded in growing the power of the courts. Obama has replaced roughly 30 percent of the district and appellate judges on the federal benches. We are now facing a judicial time bomb, the likes of which we’ve never seen before. With the Obergefell v. Hodges ruling the courts have usurped the will of the people and set a precedent that has become a de facto law of the land.
In STOLEN SOVEREIGNTY Horowitz reveals just how disenfranchised voters have become. On issue after issue we are witnessing a transformation of our society before our very eyes, all without the ability to stop it through the political process. We are becoming a government not of the people, by the people, for the people, but of the elites by the justices and for the few.
First the courts went after your income. Then they went after the right to abortion. Then Then the right for men to marry men and women to marry women. Next they will go after the right to our sovereign borders. Where will it end?
It is the legislative branch that gives the people their voice. With a weak congress, the people will suffer at the hands of a tyrannical few. By ceding the power of the purse, willfully ignoring executive overreach, blindly confirming judicial nominees, and writing statutes so broadly they transfer full legislative power to the president, the past few generations of congressmen have helped the executive branch and the courts crush their own power.
STOLEN SOVEREIGNTY is a book defending sovereignty and society from the courts. Horowitz masterfully explains the legal foundations of this great nation and how the three branches of government are designed to keep the people free. He outlines how the recent overreach of the judicial branch has led to the extinguishing of the voice of the people. And most important, he provides solutions as the looming immigration crisis overshadows the political landscape.
“It is no longer sufficient to sneer, scorn, or warn against the judicial tyranny; it’s time to fight back and implement immediate reforms or we will cease to exist as a democratic society and a sovereign nation,” says Horowitz.
As we hunger for leaders who will steer the country back on the track of liberty and justice for all, we must ensure we are never one court decision or one executive order away from losing our society, sovereignty, and government. The courts have spoken. Now, it’s time for the American people to reclaim their sovereignty.

Daniel Horowitz is a Senior Editor at Conservative Review and a regular guest on nationally syndicated radio programs such as Sean Hannity, Laura Ingraham, and Steve Deace, along with weekly appearances on more than ten regional radio shows. Horowitz’s pieces are often quoted in articles in the Associated Press, Wall Street Journal, USA Today, and on Fox News. Horowitz resides in Baltimore, Maryland with his wife and three children. Mark R. Levin is the author of the #1 New York Times bestsellers Plunder andDeceit, Liberty and Tyranny, Ameritopia, and The Liberty Amendments. He is a nationally syndicated talk-radio host and president of the Landmark Legal Foundation. Visit MarkLevinShow.com.