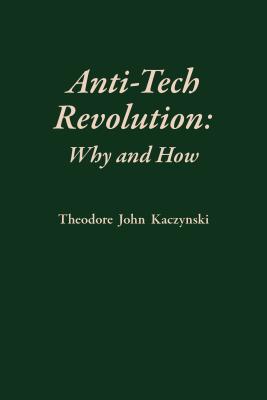 By Theodore Kaczynski
Out of Print

In Anti-Tech Revolution: Why and How, Kaczynski compellingly argues for why rational control over the development of society is forever impossible.  Rather than being guided by “reason,” Kaczynski shows that a universal process analogous to biological natural selection operates autonomously on all dynamic systems and that this process primarily determines all significant historical developments.  Furthermore, Kaczynski argues for why the direct consequences of uncontrollable technological growth necessarily leads to a disastrous disruption of the natural equilibrium of global biological and human social systems.

Based on this new understanding of social and biological change, and by way of an extensive historical and theoretical examination of prior social movements and revolutions, Kaczynski argues that there is only one route available to effect substantial influence on the course of human development to avoid the disaster that technological growth entails: a revolution against technology and industrial society. To this end, Kaczynski offers a practical, “grand-strategic” prescription for the only realistic way to significantly alter the course of society to prevent the fast-approaching technological disaster.

Theodore John Kaczynski, Ph.D. (a.k.a. Ted Kaczynski) was born in 1942 in Chicago, Illinois. He attended Harvard at age sixteen, earned his Ph.D. in mathematics from the University of Michigan and became assistant professor of mathematics at UC-Berkeley at the age of twenty-five. After two years, Kaczynski resigned his professorship and moved to a remote wilderness area of western Montana to pursue a life-long ambition of living an autonomous and self-sufficient life from the land, which he did for twenty-five years.

Kaczynski has been incarcerated since 1998 in rigorous confinement at Federal Prison ADX in Florence, Colorado, after receiving a life sentence for the long-term violent campaign he undertook to call world-wide attention to the colossal dangers inherent in technological growth.

"There are more than a few people who feel that society's rush toward a technological future will lead to disaster. This book presents some pointers for thinking in broad, strategic terms about getting society off that particular road.

The overall goal for any organization, whether it is social, political or environmental, should be clear and simple. It can't be something vague, like 'promoting democracy' or 'protecting the environment.' The goal also needs to be irreversible; once achieved, it can never be taken away. An example is when women got the right to vote in the early 20th century. After it happened, any politician was going to have a very hard time taking it away from them. No matter how democratic an organization claims to be, there will be times when not every issue can be placed before the entire membership for a vote. There needs to be an inner core of committed members with the authority to make such decisions.

Throughout history, many people have suggested that human society needs to be 'planned' or 'controlled,' for various reasons. A huge, chaotic thing like human society can not be controlled to any great extent. At most, it can be "nudged" in one direction or another. Who decides in what direction human society should go? What is a 'good' outcome? Assume, just for a moment, that it is possible to control human society. Assume that there is a computer system big enough to handle the trillions of equations that need to be solved. Who is in charge, a person or a small group? Who gets to decide who that person, or people, should be? Can a lack of ego be guaranteed?

A number of writers, including Ray Kurzweil, are looking forward to the day when human immortality, or the coming of human cyborgs or the uploading of a person's brain to a computer become reality. The author asserts that these are nonsense. For instance, immortality will only be available to the one percent, not to everyone.

This book is heavy history and social science, so it is not for everyone. The reader will get a lot out of it. This is very highly recommended." — Midwest Book Review

"Theodore Kaczynski has an interesting history. At age 25, he became an assistant professor of mathematics at University of California, Berkeley, the youngest professor ever hired by the university. After resigning at age 26, Kaczynski retreated to a remote cabin in Montana to learn to survive self-sufficiently. Frustrated at finding many natural areas replaced by roads and infrastructure and disillusioned with the current system of societal reform, the former mathematician turned to domestic terrorism.

Kaczynski first published Industrial Society and Its Future in 1995 by mailing out letters to targets and news outlets, proclaiming that he would stop his bombing campaign if they published his essay word-for-word. In 1996, the 'Unabomber,' as Kaczynski was called, was finally arrested. He is imprisoned for life.

Even in prison, Kaczynski has continued to write. The ambitious title of latest book Anti-Tech Revolution: Why and How would suggest that Kaczynski, after years of deliberating in prison, has found and published the solution to the uncertainty of a technological future. The solution he proposes in this work, however, is not so clear-cut.

He differentiates his book’s arguments from those of an engineering textbook, prefacing: '[a]n engineering textbook provides precise rules which, if followed mechanically, will consistently give the expected results. But no such precise and reliable rules are possible in the social sciences. The ideas in this book therefore need to be applied thoughtfully and creatively, not mechanically or rigidly.' Flexibility and thoughtfulness are themes throughout the book, most prevalent in the first essay, in which Kaczynski argues for continuous, short-term intervention to adapt with societal changes, rather than a stagnant, long-term plan.

Kaczynski treats human society as a self-propagating system, which he defines in his second essay as 'a system that tends to promote its own survival and propagation.' From this definition, he proposes that 'natural selection will lead to [their] evolution' in complexity and will favor 'self-propagating systems that pursue their own short-term advantage.' This evolution, he argues, has led human society to propagate across the globe, fostering a technological system that will eventually self-destruct due to the increased instability arising from greater complexity. Kaczynski counters technophiles through well-reasoned arguments, creating formidable justifications for his beliefs.

The third essay proposes a series of postulates and rules to address problems that past revolutions have perpetrated. Kaczynski’s cautionary advice serves as a warning to how a revolution can become warped without a clear goal. He addresses concerns of acquiring common agreement with the term “democratic fallacy” in his final essay, arguing that it is not the number of people but rather the 'dynamics of social movements' that determine the outcome of democratic elections. Although they can read as somewhat idealistic, these postulates are solid arguments backed by historic trends.

The final essay, like the first, emphasizes the importance of 'flexibility.' The difficulty in predicting long-term actions means that the 'consistent short-term intervention' he brings up in his first essay is crucial for success. What reads as closest to tangible instructions is, ironically, Kaczynski’s prediction of how a successful revolution could be accomplished — that within a society, there will inevitably be a day in which 'a failure of the system' gives a group of committed revolutionaries a chance to rise up while the established authorities are left in disarray. Although logical and somewhat clear-cut, the question remains of how feasible this solution is, as it seems idealistic. As it is a reactive rather than a proactive solution, only time will tell if a group of revolutionaries will take on the challenge.

In the end, Anti-Tech Revolution: Why and How is Kaczynski’s well-reasoned, cohesive composition about how revolutionary groups should approach our mercurial future. His essays are dense with material and references, organized in a format akin to mathematical proofs, with postulates and propositions, reflective of Kaczynski’s background as a mathematician.

His more elaborate arguments focus more on the 'revolution' than on the 'anti-tech,' distilling ideas based on the flaws and merits of past social movements. If you are expecting an immediate remedy, you may want to give this book a pass. Otherwise, I recommend that you read this compelling perspective on how we can frame our struggles in a technological society, with considerations applicable to any social movement, neo-Luddite or not." — Ivy Li, The Tech - MIT Student Newspaper

"Kaczynski's second book, Anti-Tech Revolution, is a true milestone in thinking about technology.  It is a well-researched, well-written, and thoroughly-documented work dedicated to undermining the technological system before its worst consequences become reality. Nothing else like it exists. All those concerned with the future of humanity and the planet would do well to study it carefully." — Prof. David Skrbina, University of Michigan, Dearborn, USA

"In this thoughtful book, Dr Kaczynski provides a blueprint for the radical anti-technology movement. If you want to stop AI before it's too late, this may be your best bet." — Dylan Evans, Ph.D., author of The Utopia Experiment

“Kaczynski understands what those of us more fully participating in the technological system are unable to fully appreciate: that technological society is beyond rational human control and will result in cataclysmic harm. What he presents is a sound moral argument with what should be eye-opening historical social illustrations that are, together, too numerous to refute.” — Jai Galliott, Ph.D., School of Engineering and Information Technology, UNSW Canbarra