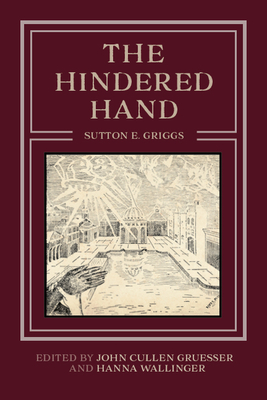 Between 1899 and 1908, five long works of fiction by the Nashville-based black Baptist minister Sutton E. Griggs appeared in print, making him the most prolific African American novelist at the turn of the twentieth century. Brought out by Griggs’s own Orion Publishing Company in three distinct printings in 1905 and 1906, The Hindered Hand; or, the Reign of the Repressionist addresses the author’s key themes of amalgamation, emigration, armed resistance, and US overseas expansion; includes a melodramatic love story; and features two of the most sensational scenes in early African American fiction—a harrowingly graphic lynching of an innocent black couple based on actual events and the elaboration of a plot to wipe out white Southerners by introducing yellow fever germs into the water supply.

Written in response to Thomas Dixon’s recently published race-baiting novel The Leopard’s Spots, Griggs’s book depicts the remnants of the old Southern planter class, the racial crisis threatening the South and the North, the social ferment of the time, the changing roles of women, and the thwarted aspirations of a trio of African American veterans following the war against Spain. This scholarly edition of the novel, providing newly discovered biographical information and copious historical context, makes a significant contribution to African American literary scholarship.

Hanna Wallinger is associate professor of American studies at Salzburg University in Austria and the author of Pauline E. Hopkins: A Literary Biography.

“A scholarly edition of The Hindered Hand is long overdue, and Gruesser and Wallinger have meticulously researched not only the publication history of the novel, but the history of Griggs’s self-publishing endeavors. Their research makes a valuable contribution to the field of African American literary and book history.”
—Alisha Knight, author of Pauline Hopkins and the American Dream