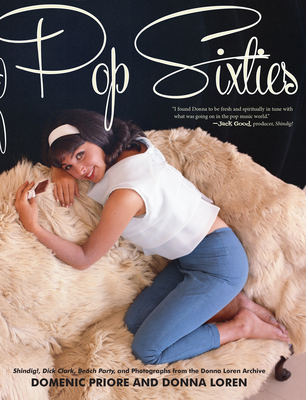 By Donna Loren (With), Domenic Priore
$34.95
Email or call for price

Pop Sixties: Dick Clark, Beach Party, and Photographs from the Donna Loren Archive is the photographic retrospective of a 1960s It Girl. Featuring narrative by Loren herself and the help of longtime Los Angeles archivist Domenic Priore, Donna Loren looks at her work on television's Shindig and Dick Clark's Caravan of Stars tour (including images of The Supremes, James Brown, Jerry Lee Lewis, and many more), plus behind-the-scenes on the sets of Batman, The Monkees, and all the American International beach movies. At a time when The Beach Boys and Beach Blanket Bingo were on top, Donna Loren was the iconic California Girl.

Donna Loren started singing professionally on the Mickey Mouse Club and became the Dr. Pepper Girl which lead to her primary role in Beach Blanket Bingo, where she sings her signature song, It Only Hurts When I Cry. Donna retired in 1968 when she married Lenny Waronker whom she met at Warner Bros. Records while being an artist for Reprise. They had three children; Joey, Anna and Katie. Donna is currently revitalizing life in a new marriage to her prom date, Jered Cargman. She lives in Los Angeles. Domenic Priore is the author of Riot on Sunset Strip: Rock 'n' Roll's Last Stand in Hollywood, Pacific Ocean Park: The Rise and Fall of Los Angeles' Space Age Nautical Pleasure Pier (with Christopher Merritt), Beatsville (with Martin McIntosh), Pop Surf Culture: Music, Design, Film and Fashion From the Bohemian Surf Boom (with Brian Chidester) and Smile: The Story of Brian Wilson's Lost Masterpiece. He wrote the booklet notes for The Beach Boys: Smile Sessions box set (Capitol) as well as the DVD booklet for The Decline of Western Civilization Collection (Shout! Factory). Priore was the primary writer for the two-part AMC documentary series Hollywood Rocks The Movies, hosted by Ringo Starr and David Bowie. He lives in Los Angeles.