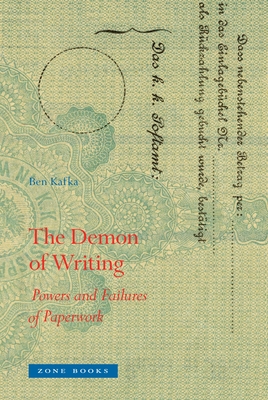 Since the middle of the eighteenth century, political thinkers of all kinds -- radical and reactionary, professional and amateur -- have been complaining about "bureaucracy." But what, exactly, is all this complaining about?

The Demon of Writing is a critical history and theory of one of the most ubiquitous, least understood forms of media: paperwork. States rely on records to tax and spend, protect and serve, discipline and punish. But time and again this paperwork proves to be unreliable. Examining episodes from the story of a clerk who lost his job and then his mind in the French Revolution to Roland Barthes's brief stint as a university administrator, the book reveals the powers, failures, and even pleasures of paperwork. Many of its complexities, the book argues, have been obscured by the comic-paranoid style that characterizes so many of our criticisms of bureaucracy. At the same time, the book outlines a new theory of what Marx called the "bureaucratic medium." Returning first to Marx, then to Freud, The Demon of Writing argues that this theory of paperwork must be attentive to both praxis and parapraxis.