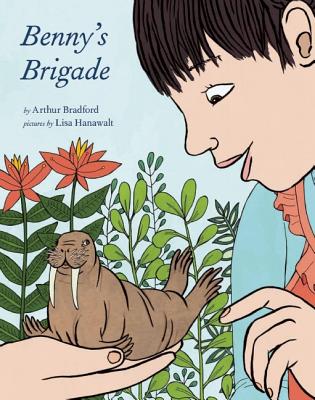 At recess one day, sisters Elsie and Theo spy a nut wiggling on the ground. Out pops Benny?the world's smallest and most gentlemanly walrus. After the girls learn that Benny misses his home in the sea, they send him sailing in a milk-carton boat, along with a trusty band of adventure-seeking slugs. Together, Benny's Brigade (as they call themselves) begin their voyage to a truck-sized island paradise, avoiding the salt water as much as they can. Slugs don't like salt.

Arthur Bradford is an O. Henry Award winning writer and filmmaker. His writing has appeared in Esquire, McSweeney's, Vice, Zoetrope, Men's Journal, and many other publications. His first book, Dogwalker, was published by Knopf in 2001 and Vintage paperback in 2002. It has been translated into nine languages. Bradford is also the creator and director of the acclaimed How's Your News? documentary series, versions of which have been broadcast on HBO/Cinemax, PBS, and Channel Four England. Most recently Bradford developed the concept into a series for MTV which ran throughout 2009. He has also directed several shorts and music videos. Bradford lives in Portland, Oregon and serves as co-director of Camp Jabberwocky, the nation's longest running residential summer camp for people with disabilities. Lisa Hanawalt lives in Brooklyn and was born and raised in Palo Alto, CA. She got an art degree at UCLA in 2006. She has received multiple awards for her comic books (2009 Ignatz Award for Outstanding Mini-Comic and 2010 Ignatz Award for Outstanding Comic) and is pretty good at mimicking the sounds of animals. Clients and publications include: The NY Times, Chronicle Books, Vice Magazine, McSweeney's, The Believer, Arthur Magazine, Motion Theory, LA Weekly, and Teefury.

"Tiny walruses in nutshells, talking slugs what’s not to like? If your kids like to giggle at really weird stories, Benny’s Brigade will be right up their alley."
Johnathan H. Liu, Wired.com's GeekDad

"No surprise here, [McSweeney's McMullens] books so far have been every bit as unusual and beautifully produced as those on McSweeney’s adult list. Take, for example, Benny’s Brigade, an oversized picture book about two little girls and a veritable menagerie of everyday insects, garden critters and rural animals that morph into a fantastical collection of colourful creatures apparently brought to life by a child’s powers of observation."
The Montreal Gazette

"Benny's Brigade charmed the pants off of me."Pink Me

"The latest release from McSweeney's McMullens series is yet another gorgeously designed children's book, with captivating artwork, a surreal plot, and a dust jacket that unfolds into a poster, revealing gold foil embossed slugs on the cover... I certainly enjoyed discussing the possible sub-plots in this weird, yet charming book."Media Darlings

"While walking to school, Theo and Elsie find a wiggling nutshell. The sisters carefully pry it open and discover Benny, a pocket-size, talkative walrus. After he sings about wishing to return to the sea, a group of children builds him a boat. Theo and Elsie place Benny and a brigade of three slugs in it and put it into a creek, hoping the creek will transport Benny and company to the sea. Remembering that slugs’ skin can be harmed by salt water, the travelers make their home on a small island inhabited by an assortment of creatures. Bradford’s unusual plot may have some appeal to children with broad imaginations. There is plenty of dialogue among the characters in the at-times dry text. The story presents positive images of children concerned for an animal away from its natural habitat as well as children who take charge of returning it to its original environment. Working cooperatively to construct a milk-carton boat for Benny provides a nice example of problem solving. Hanawalt’s large, single- and double-page artwork, done in muted colors, is filled with a variety of plant and animal life. An assortment of creatures hides among the plants and roams freely in the outdoor terrain. Changing illustration angles offers differing perspectives of the outdoor environment. When removed from the book and fully opened, the book jacket transforms into a poster depicting the story’s creatures enjoying their lives on the island. Images from the artwork are replicated on the end papers; each one is labeled. Benny’s Bridage is an odd fantasy that ties-in with lessons on compassion, animals, and environments."Lynn Vanca, freelance librarian, Akron, OH, School Library Journal