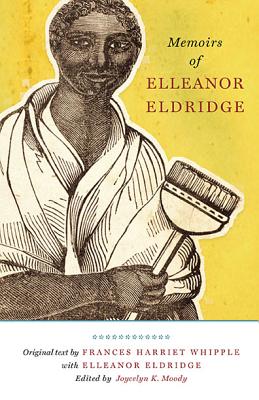 Elleanor Eldridge, born of African and US indigenous descent in 1794, operated a lucrative domestic services business in nineteenth century Providence, Rhode Island. In defiance of her gender and racial background, she purchased land and built rental property from the wealth she gained as a business owner. In the 1830s, Eldridge was defrauded of her property by a white lender. In a series of common court cases as alternately defendant and plaintiff, she managed to recover it through the Rhode Island judicial system. In order to raise funds to carry out this litigation, her memoir, which includes statements from employers endorsing her respectable character, was published in 1838. Frances Harriet Whipple, an aspiring white writer in Rhode Island, narrated and co-authored Eldridge’s story, expressing a proto-feminist outrage at the male “extortioners” who caused Eldridge’s loss and distress. With the rarity of Eldridge’s material achievements aside, Memoirs of Elleanor Eldridge forms an exceptional antebellum biography, chronicling Eldridge’s life from her birth through the first publication of almost yearly editions of the text between 1838 and 1847. Because of Eldridge’s exceptional life as a freeborn woman of color entrepreneur, it constitutes a counter-narrative to slave narratives of early 19th-century New England, changing the literary landscape of conventional American Renaissance studies and interpretations of American Transcendentalism.
With an introduction by Joycelyn K. Moody, this new edition contextualizes the extraordinary life of Elleanor Eldridge—from her acquisition of wealth and property to the publication of her biography and her legal struggles to regain stolen property. Because of her mixed-race identity, relative wealth, local and regional renown, and her efficacy in establishing a collective of white women patrons, this biography challenges typical African and indigenous women’s literary production of the early national period and resituates Elleanor Eldridge as an important cultural and historical figure of the nineteenth century.

Elleanor Eldridge (1794-1862) was born free in Rhode Island. She and her siblings acquired considerable property and local prestige, despite rampant racism against people of color in the state. As a successful proprietor and entrepreneur in Warwick and Providence, Elleanor Eldridge cultivated and maintained harmonious relationships with the white women she served such that they backed her during a series of lawsuits in which she was involved, and eventually won. Frances Harriet Whipple Green McDougall (1805-1878) was a minor US woman writer committed to developing a career for herself as a publishing social activist as well as to creating opportunities for other women and for people of color. Her first publication, The Original, was a magazine for New England women short-lived in the early 1820s. Her biographies of Elleanor Eldridge followed. She went on to publish in multiple genres ranging from abolitionist magazines, prolabor tracts, botany textbooks, and temperance and Spiritualist tracts. Joycelyn K. Moody is the Sue E. Denman Distinguished Chair in American Literature and Professor of English at the University of Texas at San Antonio, where she teaches and publishes on black print culture studies, US narratives of slavery, African American autobiography, and women’s self-representation. She is also founding Director of UTSA’s African American Literatures and Cultures Institute. With John Ernest, she co-edits the West Virginia University Press series Regenerations: African American Literature and Culture.