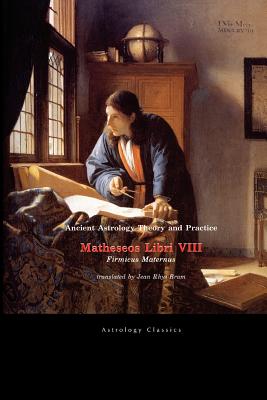 Julius Firmicus Maternus, a native of Sicily, was a Roman lawyer of the senatorial class. He lived in the first half of the fourth century AD (c.280-c.360). He was also a student of Greek astrology, which forms the basis of this book. Of this book, James Herschel Holden writes, "The Mathesis is the lengthiest astrological treatise that has come down to us from the classical period. It consists of eight books, of which the first forms an introductory essay on astrology, and the rest set forth the fundamentals of Greek astrology. Several sections contain material that is found nowhere else...." (History of Horoscopic Astrology, pg. 66.) The translator writes, "Magic, philosophy, science and theology combine in strange ways in the thinking of the last centuries of the Roman empire..... Firmicus seemed worthy of note for many reasons. He is almost alone as author of works produced both before and after an apparent conversion to Christianity.... He left a lengthy handbook detailing the astrological practices of his day, the only work which has come down to us in its entirety 90% complete: Holden] out of numerous astrological treatises written in the Hellenistic and Roman periods..... This manual was important because it was the channel for astrological lore to the Middle Ages and Renaissance." (from the Preface) Jean Rhys Bram holds a degree in Latin from the University of Chicago, and a Ph.D. in Classics from New York University. She taught Latin, ancient Greek, and Mythology at Hunter College until her retirement. At 92, she continues to read widely and tutor students. She enjoys the company of twelve cats.