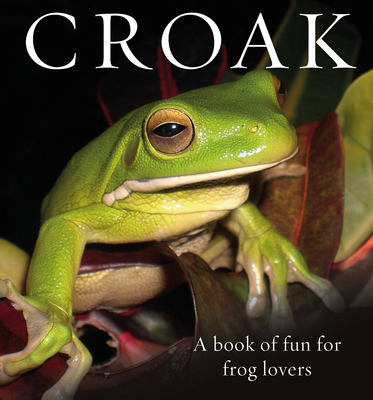 Croak is a collection of delightful quotes and gorgeous photographs celebrating the underappreciated beauty of frogs. It will delight anyone with a fondness of these fascinating creatures, and may surprise others who haven’t yet come to appreciate the members of the animal kingdom who ‘croak’.

As amphibians, frogs are part of the most threatened group of land animals. They come in every shape and form, from round blobs to leaf-like mimics; they live on every continent in the world except for Antarctica; and they have a huge variety of lifestyles and reproductive modes, from giving birth to live young and carrying babies around on their backs to living their entire lives in deep caves underground! Croak will open your eyes to their vibrant variety and the urgent need to protect our amphibian friends.

Many of the stunning, colourful images in Croak were taken by author Phil Bishop on his travels around the world. They showcase frogs in their natural habitats, paired with quotes from famous faces such as Cameron Diaz and John Steinbeck. Simultaneously amusing and illuminating, this is the perfect coffee table book to be dipped into occasionally, or to be read all at once by budding frog-aficionados.

So if you’re interested in what frogs were up to 65 million years ago, or how they are related to 10% of all Nobel prizes, pick up Croak and find out all about these wonderful creatures.

Phil Bishop was born and brought up in Devon, UK, where his keen interest in amphibians began. What followed was a lifetime of achievements in conservation and in highlighting the ground-breaking importance of the humble frog. Searching for more species of amphibian, Phil travelled the world to places including South Africa, where he discovered and named a new species of frog, Arthroleptella ngongoniensis. Phil’s extensive experience in the study of frogs inspired him to compile the collection of frog-related quotes that is Croak. Phil was a Professor of Zoology at the University of Otago, the Co-Chair of the IUCN Species Survival Commission Amphibian Specialist Group, and the Chief Scientist of the Amphibian Survival Alliance. In these positions, he helped to coordinate international amphibian conservation in response to the global Amphibian Conservation Action Plan. His team of students and post-docs (and often sabbatical visitors) mainly concentrated on the conservation of New Zealand frogs as they are some of the least well known frogs in the World, even within New Zealand. His lab group worked on improving methods for frog translocations, discovering new and interesting aspects of basic frog biology, amphibian diseases, monitoring endangered frog populations, and improving environmental education. Phil has been widely published, with three previous books about frogs, several book chapters, and over 100 ground-breaking scientific papers. He was an editor of FrogLog, the world’s most popular online amphibian conservation magazine. Phil won many awards for his teaching and conservation efforts, including the University of Otago Lifetime Achievement Award 2018 and the National Conservationist of the Year Award 2018 by Auckland Zoological Park Recognising Excellence. Phil’s passing early in 2021 is a loss keenly felt by the international scientific community. This book now serves as a tribute to a life spent at the forefront of conservation as he sought to deepen our understanding of these vitally important creatures.

This book is the perfect introduction to the world of frogs.—Let’s Find Out (Victorian Sconce Teacher’s Magazine)

Insightful musings on the environment by the likes of David Attenborough, Jean-Michel Cousteau, Jane Goodall (who twice visited NZ as a guest of Bishop’s) and Tim Flannery provide thoughtful sustenance.—The Australian

Quite the visual feast. Seeing all these pictures reminds me that not all frogs are green; the colour variation between the various species is just staggering.—Halfman, Halfbook

With quotes from Shakespeare to Voltaire, … to the world’s most prominent amphibian conservationists, every single sentence included in this book is in its own way entertaining, enlightening and informative.—Amphibian Survival Alliance