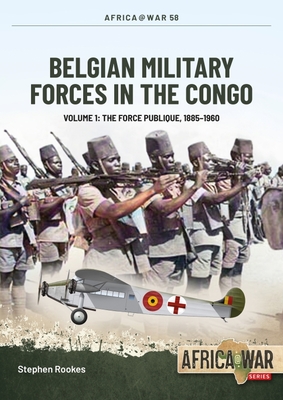 Though the dynamics of the Congo Crisis have received, and continue to receive, a good deal of literary and scholarly attention, missing from the canon of work on military forces in the Congo is a study of the Force Publique, a paramilitary police force established by King L opold II to secure the Congo Free State and to protect a vast geographical swath of Central Africa that had become his own personal possession following the Berlin Conference of 1884-1885. In many ways, the absence of any study on the origins of the Force Publique to its dissolution in 1960 means that our knowledge surrounding the history of the Belgian Congo and the modern-day Democratic Republic of the Congo is incomplete. Indeed, it is possible to trace the origins of rebellion in the Congo Crisis (1960-1967) back to the Batetela Rebellions that took place in the Congo Free State in the 1890s and early 1900s, and to link them with a succession of anti-Belgian popular uprisings that took place in the Congo up to the time of the Congo's independence. Moreover, a revolt by NCOs of the Force Publique was one of the sparks that plunged the Congo into crisis in early July 1960.

It would be wrong to say, nonetheless, that the geographical extent of this volume - the first of two on Belgian military forces in the Congo - is limited within the boundaries of the Congo Free State and the Belgian Congo: through descriptions of military encounters in Africa in the late 1890s and First and Second World Wars, the history of the Force Publique is extended into a study of war in the Sudan, East Africa, and in Ethiopia.

For aviation enthusiasts, this volume is significant in that its objective is to provide a history of the development of air travel to and from the Belgian Congo in addition to examining the evolution of military air forces in the colony. Again, we can link the Force Publique's air branch to the Congo Crisis as a number of its pilots and aircraft served to form the basis of the Katangan Air Force and the Congolese Air Force; two forces that were highly influential in deciding the future of the Congo after its independence.

The first volume of Belgian Military Forces in the Congo is illustrated throughout with photographs and includes specially commissioned color artworks of the weapons, soldiers and aircraft of the Force Publique.