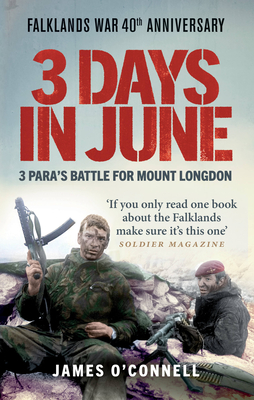 By James O'Connell
Out of Print

On its 40th anniversary, the bloodiest battle of the Falklands War is retold in extraordinary detail by the men who were there
***

"If you only read one book about the Falklands make sure it's this one." - Soldier magazine

"An extraordinarily detailed account of the bloodiest battle of the Falklands war." - Major General Jonathan Shaw CB CBE  When 3 Para began their assault under cover of darkness on Mount Longdon in June 1982, nobody knew what to expect. The three platoons of B Company each approached the mountain silently, treading carefully through a series of defensive minefields. But following an explosion, fighting quickly escalated with shocking speed and severity, resulting in some of the bloodiest close hand fighting, terrible injuries and shocking loss of life experienced by British troops since the Korean war.

Forty years on, James O'Connell - who fought there and was injured himself - recreates this bloody battle in a gut-wrenching 360 degree classic.

Frustrated by highly inaccurate books about the battle, O'Connell decided to set the record straight. He revisited the Falkland's five times with comrades and Argentine soldiers and literally walked through the battle with them, step-by-step, creating an unprecedented masterpiece of immersive military publishing.

Combined with rare access to the Battalion's records and radio logs, the resulting book is the last word in Mount Longdon, and might be the most harrowingly realistic description of modern warfare you will ever read.

James O'Connell, born in Merseyside, where he still lives, enlisted in the Parachute Regiment in 1979. In April 1982, after a posting in Cold War Germany and a tour of Northern Ireland, the call came to take part in the British Task Force to re-capture the Falklands. During the attack on Mount Longdon, James was shot in the face. A bullet passed through his nose, destroying his right eye, cheekbone and front teeth. Though he survived, five years of reconstructive surgery followed, and James left the army in 1985 as a result of his injuries. Following the conflict, transition to civilian life was a difficult and James suffered from what was likely undiagnosed PTSD. He eventually met and married his wife Maureen, and they have two sons. Since 2014, James has helped with the campaign to get a posthumous gallantry medal for Cpl Stewart McLaughlin and was instrumental in getting a memorial erected on Mount Longdon on the exact location where Sgt Ian McKay was killed winning a posthumous Victoria Cross, and he has travelled to the Falklands several times in order to write this book.