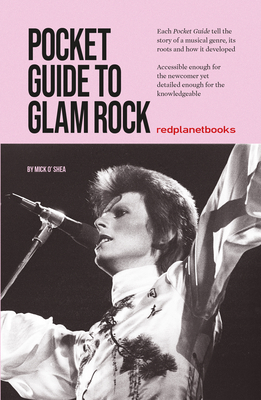 Glam rock began in the UK in the early Seventies performed by musicians with outrageous costumes, makeup, and hairstyles, particularly platform shoes and glitter. The flamboyant clothing and visual styles of performers were often camp or androgynous, and have been described as playing with other gender roles. British glam rock artists include David Bowie, Mott the Hoople, Sweet, Slade and Roxy Music. Those not central to the genre, such as Elton John, Rod Stewart and Freddie Mercury of Queen, also adopted glam styles. US glam artists included The New York Dolls, Sparks, Suzi Quatro, and Iggy Pop.

Mick O' Shea is an established writer with books about a diverse range of acts including Guns N' Roses (The Guns N' Roses Encyclopaedia) One Direction (5 Seconds of Summer) and Amy Winehouse (A Losing Game), The Smiths, Pocket Guide to Ska and Pocket Guide to Punk. He has also written both fact and fiction about the Sex Pistols.