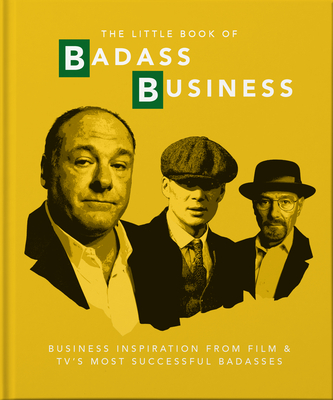 This is book number 1 in the Little Book Of... series.

The Little Book of Badass Business features more than 170 quotes from a variety of moguls, millionaires and titans of industry - both legitimate and less so...

From advice on building your empire from self-made men like Breaking Bad's Walter White, to tips on the art of negotiation from seasoned dealmakers like The Godfather's Don Vito Corleone, this collection of bite-sized quips is essential reading for anyone looking to make their mark in the corporate, cut-throat world of business.

'Greed, for lack of a better word, is good. Greed is right, greed works. Greed clarifies, cuts through, and captures the essence of the evolutionary spirit.' Gordon Gekko outlines the virtues of avarice when it comes to cold, hard cash. Wall Street (1987) 20th Century Fox.

'You're born, you take shit. You get out in the world, you take shit. You climb a little higher, you take less shit. Til one day you're up in the rarefied atmosphere and you've forgotten what shit even looks like.' Eddie Temple explains the path to success for up-and-coming entrepreneurs. Layer Cake (2004) Sony Pictures.

'Come at the king, you best not miss.' Omar Little offers some words of warning in the face of a hostile takeover.The Wire, Season 1 Episode 8: 'Lessons'.