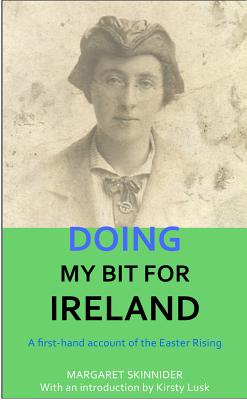 By Margaret Skinnider
$19.95
Email or call for price

Doing my Bit for Ireland is Margaret Skinnider’s autobiography, focusing mostly on the time period shortly before and after the 1916 Easter Rising in Ireland. In it, she details her activities and motivations, along with her observations of the quality and nature of Irish life under English rule. This is a detailed, colourful account of a complex and highly controversial series of events, provided by an eyewitness to and participant in this vital part of Ireland’s history.

MARGARET SKINNIDER was born in Coatbridge, Lanarkshire, in 1893. She trained as a maths teacher and moved to Glasgow. While there, she became involved with Cumann na mBan, a women’s organization founded in Dublin in 1914, and the women’s suffrage movement. She also learned to shoot at a rifle club. She made many trips to Ireland, sometimes smuggling detonators and wires for bombs under her clothes. During the rising Skinnider performed various roles, including scout, messenger, and sniper. She was ultimately shot while attempting to burn down some houses to cut off the British retreat. She was arrested, but due to her injuries was permitted to stay in hospital, from which she escaped and fled to Scotland. Later that year, she left for New York, where she wrote this book as well as touring and fundraising for the republican cause. She later returned to Ireland, where she spent some time in prison during the War of Independence. Her later life was spent teaching, and she never stopped fighting for the rights of women. She died in Glenageary in 1971.