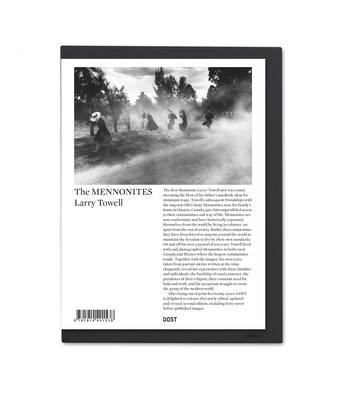 Larry Towell first encountered the Mennonites near his home in Ontario, Canada, and his friendship with them gained him unique access to their communities.

Rather than compromise their way of life, Mennonites have continually been forced to migrate around the world to maintain their freedom to live as they choose. Towell photographed Mennonites in Canada and Mexico for over ten years, and his own texts tell in detail his experiences with their communities: the harshness and poverty of their rural existence, the disciplines and contradictions of their religion, their hunger for land and work, and the constant struggle to keep the modern world at bay. This second edition, re-edited and re-sequenced includes forty new images from the photographer's archive.

The son of a car repairman, Towell grew up in a large family in rural Ontario, Canada. During studies in visual arts at Toronto's York University, he was given a camera and taught how to process black and white film. A stint of volunteer work in Calcutta in 1976 provoked Towell to photograph and write. In 1984, he became a freelance photographer and writer focusing on the dispossessed, exile and peasant rebellion. He completed projects on the Nicaraguan Contra war, on the relatives of the disappeared in Guatemala, and on American Vietnam War veterans who had returned to Vietnam to rebuild the country. His first published magazine essay, Paradise Lost, exposed the ecological consequences of the catastrophic Exxon Valdez oil spill in Alaska's Prince William Sound. He became a Magnum nominee in 1988 and a full member in 1993. In 1996, Towell completed a project based on ten years of reportage in El Salvador, followed the next year by a major book, Then Palestine. His fascination with landlessness also led him to the Mennonite migrant workers of Mexico, an eleven-year project completed in 2000.