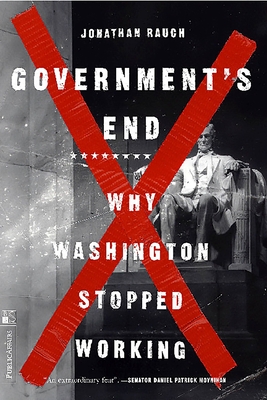 An earlier edition of this extraordinarily prescient, elegantly written book created a sensation among Washington media insiders when it was published more than five years ago under the title Demosclerosis. In it, Jonathan Rauch, a former correspondent for The Economist and a columnist for National Journal, showed with startling clarity the reasons why America's political system (and, in fact, other political systems as well) was becoming increasingly ineffective. Today, as Rauch's predictions continue to manifest themselves in a national politics of "sound and fury" and little effective legislation, and in increasing voter cynicism, this book has achieved renown as the classic and essential work on why politics and government don't work. In Government's End, Rauch has completely rewritten and updated his earlier work to reassess his theory, analyze the political stalemate of the last few years, and explain why sweeping reform efforts of the kind led by Ronald Reagan, Bill Clinton, and Newt Gingrich aren't the answers. He also looks ahead at what is likely to happen -- or not happen -- next, and proposes ideas for what we must do to fix the system. For anyone who cares about the health of American democracy -- and indeed of international security -- Government's End is a fascinating, disturbing, and vitally important book.

Acclaimed as the smartest young political journalist in Washington, Jonathan Rauch writes a bi-weekly column for National Journal and contributes widely to other magazines and journals. A graduate of Yale University, he lives in Washington, D.C.