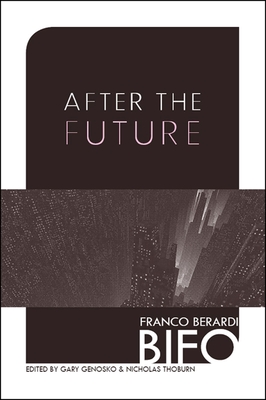 After the Future explores our century-long obsession with the concept of the future. Beginning with F. T. Marinetti's Futurist Manifesto and the worldwide race toward a new and highly mechanized society that defined the Century of Progress, highly respected media activist Franco Berardi traces the genesis of future-oriented thought through the punk movement of the early '70s and into the media revolution of the '90s. Cyberculture, the last truly utopian vision of the future, has ended in a clash, and left behind an ever-growing system of virtual life and actual death, of virtual knowledge and actual war.

Our future, Berardi argues, has come and gone; the concept has lost its usefulness. Now it's our responsibility to decide what comes next.

Drawing on his own involvement with the Autonomia movement in Italy and his collaboration and friendship with leading thinkers of the European political left, including F lix Guattari and Antonio Negri, Berardi presents a highly nuanced analysis of the state of the contemporary working class, and charts a course out of the modern dystopian moment.

Franco Berardi, better known in the United States as Bifo, is an Italian autonomist philosopher and media activist. One of the founders of the notorious Radio Alice, a pirate radio station that became the voice of the autonomous youth movement of Bologna in the late 1970s, Bifo is the author of multiple works of theory, including the recently published The Soul at Work and The Post-Futurist Manifesto.

Franco Bifo Berardi: Franco Berardi, better-known in the United States as Bifo, is an Italian autonomist philosopher and media activist. One of the founders of the seminal Radio Alice, a notorious pirate radio station that became the voice of the student movement in Italy throughout the 1970s, Bifo is the author of multiple works of theory including the recently-published The Soul at Work (Semiotexte 2009) and The Post-Futurist Manifesto.