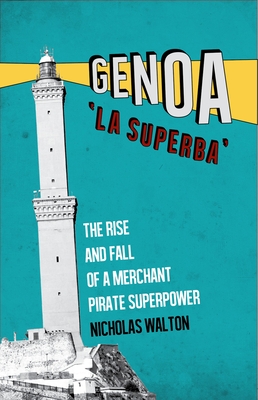 Genoa has an incredible story to tell. It rose from an obscurity imposed by its harsh geography to become a merchant-pirate superpower that helped create the medieval world. It fought bitter battles with its great rival Venice and imprisoned Marco Polo, as the feuding city-states connected
Europe to the glories of the East. It introduced the Black Death to Europe, led the fight against the Barbary Corsairs, bankrolled Imperial Spain, and gave the world Christopher Columbus and a host of fearless explorers. Genoa and Liguria provided the brains and the heroism behind the Risorgimento,
and was the last place emigrants saw before building new lives across the Atlantic. It played host to writers and Grand Tourists, gave football to the Italians, and helped build modern Italy. Today, along with the glorious Riviera coast of Liguria, Genoa provides some of the finest places on earth
to sip wine, eat pesto and enjoy spectacular views. This book brings the past to life and paints a portrait of a modern port city and region that is only now coming to terms with a past that is as bloody, fascinating and influential as any in Europe.

Nicholas Walton is a journalist who spent fourteen years at the BBC, covering foreign news at the World Service, working as Sarajevo and Warsaw correspondent, and making programmes from Sierra Leone to Georgia. After four years with the European Council on Foreign Relations he moved to his wife'shometown of Genoa, and now lives in Singapore.