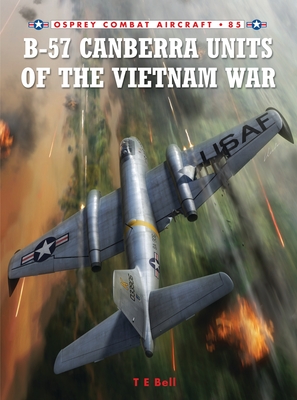 Osprey's examination of B-57 Canberra Units during the Veitnam War period (1955-1975). While not receiving as much publicity as the F-105 and F-4 fighter-bombers, which took the fight into the heart of North Vietnam, the B-57 Canberra was nevertheless the first jet-powered American attack aircraft committed to the conflict. It was involved in day-to-day interdiction missions against traffic coming down the Ho Chi Minh Trail, shooting up trucks and bombing and strafing sampans in the Mekong Delta. And, not least, the aircraft flew classified 'black' missions over the border into Laos and Cambodia.

The B-57B medium bomber began hitting targets in North and South Vietnam at the beginning of 1965. Although B-57B crews had already made a name for themselves during the hair-raising night missions during Op Rolling Thunder, late in the war many aircraft were upgraded to the then-state-of-the-art B-57G Night Intruder, which became one of the most valuable weapons in the USAF inventory.

The B-57E, in its electronic eavesdropping and countermeasures roles, starred in the so-called Patricia Lynn missions, parts of which are still classified today. Also operating alongside the USAF B-57 units, were the Canberra B 20s of the Royal Australian Air Force,attached to the USAF's 35th Bomb Wing - the exploits of the Australian Canberras will be fully documented in this book. The unit flew interdiction missions in support of troops in the field from 1967 to 1971. At the time the Canberra was called to action, the USAF, which considered the aircraft too slow, limited in its mission and not 'sexy' enough, was attempting to phase it out of the inventory. In the event, the B-57 continued to serve for another 20 years, echoing the story of the A-10 Warthog.

Jim Laurier is a native of New England and lives in New Hampshire. He attended Paier School of Art in Hamden, Connecticut, from 1974–78, and since graduating with Honours, he has been working professionally in the field of Fine Art and Illustration. He has been commissioned to paint for the US Air Force and has aviation paintings on permanent display at the Pentagon.

“...rich in events and anecdotes which take us not only through the history of the American experience with the B-57 but also through the Vietnam War itself. The book also fully documents the story of the Australian-crewed Canberra's as well as the brief but interesting use of the B-57 by the VNAF.” —Bart Cusumano, IPMS/USA

“This volume ... includes a chapter on the Vietnam deployment of No. 2 Squadron, RAAF, with its Canberra B20s, which were attached to the US 35 TFW from 1967-71. The author has relied heavily on oral history and declassified sources to provide the story of an aircraft and the crews that contributed so much to that conflict, but which has been largely overlooked by historians until now.” —Thomas Robertson, Model Aircraft (April 2011)

“The Canberra is currently a very popular modeling subject, with recent well-received kits put out by Airfix, Classic Airframes and Italeri. The B-57 underwent numerous pint scheme changes during the course of the Vietnam War, many of which are detailed in specially commissioned plates, which will be of particular interest to aviation modelers.” —Flying Models (April 2011)

“B-57 Canberra Units of the Vietnam War should be of great interest to enthusiasts of the early jet age and especially welcome among veteran crew members seeing their hitherto-unsung deeds finally getting their due.” —Vietnam (June 2011)