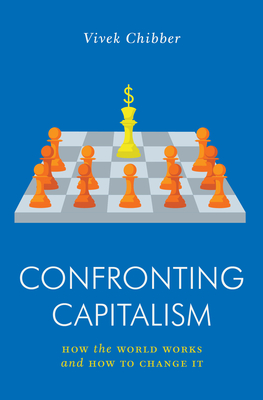 A strategic guide to building a more democratic and egalitarian future

Why is our society so unequal? Why, despite their small numbers, do the rich dominate policy and politics even in democratic countries? Why is it so difficult for working people to organize around common interests? How do we begin to build a more equal and democratic society?

Vivek Chibber provides a clear and accessible map of how capitalism works, how it limits the power of working and oppressed people, and how to overcome those limits. The capitalist economy generates incredible wealth but also injustice. Those who own the factories, hotels, and farms always have an advantage over the people who rely on that ownership class for their livelihoods. This inequality in power and income is reflected in the operation of the state, where capitalists are able to exert their will even under relatively democratic conditions. The most important reason is that states depend on the employment and profits from capitalist enterprise for both finances and legitimacy. Every meaningful victory for working people has been won through collective struggle but collective action is very difficult to coordinate. In the final section of the book, Chibber walks the reader through some of the historical attempts to build socialism and presents a vision of how we might, perhaps against the odds, build a socialist future.

Vivek Chibber is a professor of sociology at New York University and editor of the Catalyst: A Journal of Theory and Strategy.He is the author of Postcolonial Theory and the Specter of Capital and Locked in Place: State-Building and Late Industrialization in India, which won the Barrington Moore, Jr. Prize. He has contributed to, among others, the Socialist Register, American Journal of Sociology, Boston Review and New Left Review.

“This is an extraordinary book on the dynamics and politics of capitalism. I cannot think of anyone other than Chibber who could achieve such clarity and such depth.”
—Anwar Shaikh, Professor of Economics at the New School for Social Research and author of Capitalism: Competition, Conflict, Crises

“Arriving just as we’re all tempted by despair, Confronting Capitalism brilliantly illuminates our current predicament and guides us toward the only way out. Chibber reminds us that there is no way to fight injustice without confronting capital. And there is no effective confrontation of capital without a mass working-class movement. This book is both a clear primer for new leftists as well as a clarifying call to arms for seasoned veterans.”
—Krystal Ball, host of Breaking Points and Krystal Kyle & Friends

“A lucid and compelling account of the essential nature of capitalism, and how its shackles can be removed by a revived labor movement animated by a commitment to solidarity and the common good.”
—Noam Chomsky

“In this slim but mighty account, a social theorist tackles the issues of global inequality, extreme wealth, and rampant corruption in democratic countries, while explaining the structures of international capitalism and how the world can move toward a more equitable future.”
—Miguel Salazar, New York Times