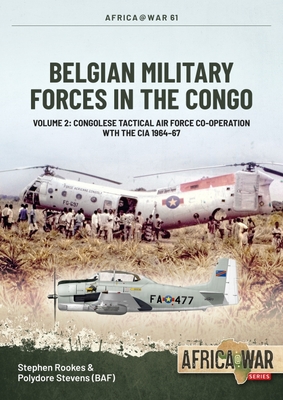 Although Belgium officially withdrew its military forces from the Democratic Republic of the Congo (DRC) in July 1960, unofficially the former colonial ruler of this central African country maintained a political, economic, and military presence throughout the period known as the Congo Crisis, 1960-1967. Belgium's military presence is seen mainly through its relations with the secessionist state of Katanga from 1960 to 1963 and through what was termed "technical assistance".

By April 1964, the DRC was, once again, threatened by internal conflict that threatened its national integrity. The Arm e Nationale Congolaise (ANC) being ill-equipped to deal with two separate rebellions that broke out in the Kwilu and Kivu provinces that year, had, nonetheless, the support of a CIA-sponsored air force composed principally of anti-Castro Cuban exiles. This air force receiving reinforcements in the shape of Harvard T-28s at the beginning of 1964, with other aircraft delivered by the CIA including Douglas C-47s, and Vertol-Piasecki H21s, the US government sought reassurances that these aircraft would be correctly maintained. After discussions were held between the US and Belgium, it was agreed that Belgium would provide further technical assistance in the DRC.

Set up at the end of May 1964, the Force A rienne Tactique Congolaise (FATAC), or the Belgian Tactical Air Force, would remain in the Congo until 1967 where its role was to assist the different armed forces of the DRC to put down the so-called 'Simba Rebellion'. These forces, including the aforementioned CIA air force, also included a mercenary army employed to re-establish order to the Congo.

In this second volume dealing with Belgian military forces in the Congo, the history of the FATAC is told using eyewitness accounts from veterans of the unit plus an array of documents relating to the period in question. This volume is a valuable addition to anyone wishing to supplement their knowledge of the Congo Crisis.