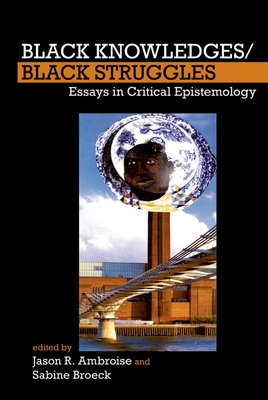 Black Knowledges/Black Struggles: Essays in Critical Epistemology explores the central but often critically neglected role of knowledge and epistemic formations within social movements for Black freedom and emancipation. The collection examines the structural subjugation and condemnation of
Black African and Afro-mixed descent peoples globally within the past 500 years of trans-Atlantic societies of Western modernity, doing so in connection to the population's dehumanization and/or invisibilization within various epistemic formations of the West. In turn, the collection foregrounds the
extent to which the ending of this imposed subjugation/condemnation has necessarily entailed critiques of, challenges to, and counter-formulations against and beyond knowledge and epistemic formations that have worked to naturalize this condition within the West's various socio-human formations. The chapters in the collection engage primarily with knowledge formations and practices generated from within the discourse of race, but also doing so in relation to other intersectional socio-human discourses of Western modernity. They engage as well the critiques, challenges, and
counter-formulations put forth by specific individuals, schools, movements, and/or institutions - historic and contemporary - of the Black world. Through these examinations, the contributors either implicitly point towards, or explicitly take part in, the formation of a new kind of critical - but
also emancipatory - epistemology. What emerges is a novel and more comprehensive view of what it means to be human, a formulation that can aid in the unlocking and fashioning of species-oriented ways of knowing and being much-needed within the context of ending the continued overall global
subjugation/condemnation of Black peoples, as a central part of ending the global problematique that confronts humankind as a whole.

Jason Ambroise is an Associate Professor in the Department of History at William Paterson University of New Jersey. His research fields include the history of race and its interconnection to other socio-human discourses of Western modernity; the history of the human sciences; and the history ofbiology/socio-biology. His teaching fields include nineteenth and twentieth century U.S. history, the history of science, and Black Studies. Previously published essays are titled Rethinking 'Race': Biocentrism and the Origins of Our Time (2004) and Biocentrism, Neo-Ptolemaicism, and E.O.Wilson's Consilience: A Contemporary Example of 'Saving the Phenomenon' of Man, in the Name of the Human (2006). He is currently working on a book-length manuscript entitled Instituting Order: On the Formation of Criminology in the U.S. Sabine Broeck teaches American Studies, Gender Studies and Black Diaspora Studies at the University of Bremen. Her research critiques the coloniality and anti-blackness of transatlantic modernity as a social formation and culture of (post)-enslavement. She is President of the international scholarlyorganization Collegium for African American Research (CAAR), as well as director of the University of Bremen Institute for Postcolonial and Transcultural Studies (INPUTS); also, she is the convener and professorial mentor of the Black Knowledges Research Group at the University of Bremen, seehttp: //www.bbs.uni-bremen.de/. Her two previous monographs are Der entkolonisierte Koerper (1988) and White Amnesia-Black Memory? American Women's Writing and History (1999). She is currently at work on a book-length manuscript entitled Gender and Anti-Blackness contracted with SUNY Press.