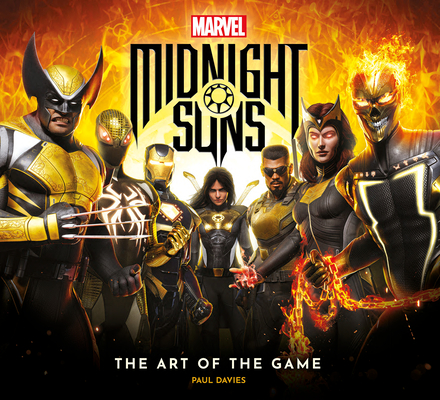 Official art book of the Marvel's Midnight Suns video game, packed with interviews with the creative team behind the game, as well as stunning concept art created during the development process.

When the demonic Lilith and her fearsome horde unite with the evil armies of Hydra, it’s time to unleash Marvel’s dark side. As The Hunter, your mission is to lead an unlikely team of seasoned Super Heroes and dangerous supernatural warriors to victory. Can legends such as Doctor Strange, Iron Man, and Blade put aside their differences in the face of a growing apocalyptic threat? If you’re going to save the world, you’ll have to forge alliances and lead the team into battle as the legendary Midnight Suns—Earth’s last line of defence against the underworld.

Marvel’s Midnight Suns – The Art of the Game captures the creative process of this much-anticipated game. The exclusive concept art and in-game renderings created by the talented development team—creating the game in collaboration with Marvel—are shown in glorious detail in this lush, hardback volume. Characters, locations, gadgets, weapons, monsters, enemies, and much more are all accompanied by unique insights from the artists and developers behind the game. So step into the world of Marvel’s Midnight Suns – and rise up against the darkness!

Paul Davies has worked in journalism for over 25 years, first editing gaming magazines and websites and now as a writer and consultant to games developers and publishers. He is the co-author of numerous gaming books including The Art of Assassin’s Creed IV: Black Flag, Awakening: The Art of Halo 4, The Art of Deus Ex Universe, The Art of Tom Clancy’s The Division, The Art of Horizon Zero Dawn and Marvel’s Spider-Man: The Art of the Game.