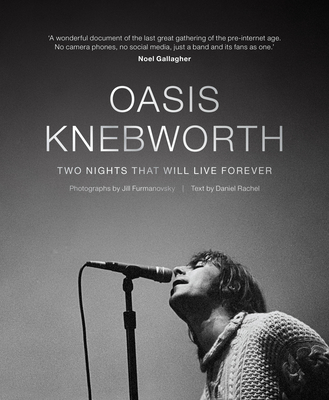 An access-all-areas book marking the 25th anniversary of the era-defining Oasis concerts at Knebworth, with stunning images taken by acclaimed music photographer Jill Furmanovsky - including contributions from Noel Gallagher and Alan McGee, and hundreds of never-before-seen pictures

"A wonderful document of the last great gathering of the pre-internet age. No camera phones, no social media, just a band and its fans as one"
- NOEL GALLAGHER

On 10th and 11th August 1996, Oasis played the concerts that would define them, a band at the height of their powers playing to over 250,000 people.

Twenty-five years on, this is the inside story of those nights, told through the breathtaking photographs of Jill Furmanovsky, granted unprecedented access to Oasis throughout that summer. Also includes newly obtained first-hand accounts from the people who were there - including Noel Gallagher and Alan McGee - in text by award-winning author Daniel Rachel.

From relaxed rehearsals and warm-up concerts to Knebworth itself - backstage, onstage, flying high above the site - many of the stunning photographs in this book have never been seen anywhere before.

This the definitive account of two nights that a generation will never forget.

Jill Furmanovsky is a world-renowned photographer, who has shot the biggest names in music history. From her beginnings as a 13-year-old standing outside Abbey Road hoping to snatch a photograph of The Beatles, Furmanovsky has gone on to work with icons such as Bob Dylan, Pink Floyd, Bob Marley, Led Zeppelin, Blondie, Eric Clapton, Amy Winehouse, The Police and many more. She worked closely with Oasis for a number of years.

Daniel Rachel is a musician turned award-winning author. His previous books include NME and Guardian Book of the Year Isle of Noises, Evening Standard Book of the Year Don't Look Back in Anger, and Walls Come Tumbling Down, which was described as 'triumphant' by the Guardian and 'superlative...brilliant' by Q magazine, and was awarded the prestigious Penderyn Music Book Prize in 2017. He saw Oasis play live many times and had a guest pass to the concerts at Knebworth in 1996.