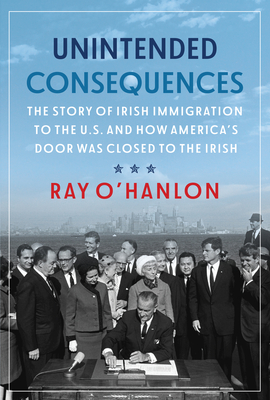 'Unintended Consequences feels like the definitive version of a story that should be much better known,' Sunday Business Post
Unintended Consequences reveals how America's door closed on legal Irish immigration in the 1960s, and how America's Irish mounted a counterattack when nation-changing political forces were sweeping the country during the era of civil rights, political assassinations, and the Vietnam War. This book looks at the full historical background to Irish migration across the Atlantic, and how the Immigration and Nationality Act of 1965 brought a near total halt to this westward flow. Successive organisations championed the undocumented Irish, and the fight continues to this day, but this is a new America, where, in recent years, there has been growing hostility to immigrants of every nationality. Ray O'Hanlon has spent over three decades reporting on battles over comprehensive U.S. immigration reform, and this Unintended Consequences is the story of the Irish past, its present, and most uncertain future in the 'land of the free'.

Ray O’Hanlon is the editor of the New York City-published Irish Echo newspaper. A native of Dublin, O’Hanlon has reported from four continents in a newspaper career spanning forty-one years. In addition to his work as a reporter and editor, O’Hanlon has been a frequent contributor to US, Irish and British media outlets reporting on Ireland, Irish American affairs, and Anglo-Irish relations. His book, The New Irish Americans (1998) was the recipient of a Washington Irving Book Award, and The South Lawn Plot, his first fiction work, was published in 2011.

"Unintended Consequences feels like the definitive version of a story that should be much better known." —Andrew Lynch, Sunday Business Post

"I was proud to hand deliver to the President of the United States, Joe Biden, a copy of my friend Ray O’Hanlon’s wonderful and insightful new book, Unintended Consequences." —United States Senator Chuck Schumer of New York