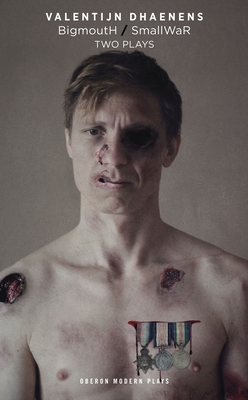 By Valentjin Dhaenens
$14.95
Email or call for price

He who picks his words well can turn the weakest argument into the strongest. Valentijn Dhaenens pays tribute to 2,500 years of oration. Ingeniously weaving together fragments of seminal sermons, declarations of war, farewells, final arguments, victory speeches and eulogies from the Grand Inquisitor and Socrates to Mohammed Ali and Osama Bin Laden, BigmoutH shows that the tricks of rhetoric have hardly changed. SmallWaR When clean souls boil up in the backwash, they will consolidate after the final war, into a peace that shall endure... but not till then. By examining the things cast up in the backwash, we can gauge the progress of humanity. Ellen Newbold-La-Motte, nurse in a field hospital, behind the front lines in 1914. A nurse maintains watchful vigil over patients as fragments of past wars lurk within the shadows. SmallWaR tells the story in the words of those who were there and led the way, and - crucially - those who followed.

Valentijn Dhaenens co-founded his own theatre company, Skagen. From 2006, the company has been rewarded with structural subsidy from the Flemish/Belgian Government for their work as one of the leading modern theatre groups in Belgium and Holland. Since 2000, Valentijn has worked mostly in theatre with over 30 productions and also film and television.