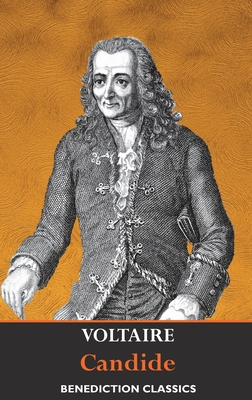 "To name Voltaire is to characterize the entire eighteenth century."--Victor Hugo.

"Italy had a Renaissance, and Germany had a Reformation, but France had Voltaire; he was for his country both Renaissance and Reformation, and half the Revolution. ... His spirit moved like a flame over the continent and the century and stirs a million souls in every generation." - Will Durant.

"Not to admire Voltaire is one of the many forms of stupidity." -- Jorge Luis Borges.

Fran ois-Marie Arouet (21 November 1694 - 30 May 1778), known by his nom de plume, Voltaire, was a French Enlightenment philosopher writer and historian. He used his satirical wit and his vivacious intelligence to oppose tyranny, bigotry and cruelty and to advocate freedom of speech, freedom of religion, and the separation of church and state.

Voltaire was one of the most prolific and versatile writers in history, writing almost 2000 books and booklets. Candide (Candide, ou l'Optimisme, being the full French title), Voltaire's most read work, is a savage denunciation of metaphysical optimism, and a rollicking satire of Leibniz' metaphysical thesis that "all is for the best".

Candide, a young man of gentle manners and true judgement, grows up enjoying an idyllic life in the Baron of Thunder-ten-Tronckh's castle. He is tutored by the famous Dr Pangloss, who asserts that "all is for the best in this best of all possible worlds." Unfortunately, Candide is caught kissing the Baron's beautiful daughter, and expelled from the castle into the harsh world outside. He and his companions then experience a series of unfortunate misadventures--war, rape, theft, hanging, shipwrecks, earthquakes, cannibalism and slavery. Face to face with evil, his Leibnizian optimism is gradually eroded. Finally, settling down to a simple life on a farm, he discovers the secret of happiness in a quiet and practical life without excessive philosophising. The book famously concludes with Candide's Il faut cultiver notre jardin: 'We must cultivate our garden.'